He Is My Master 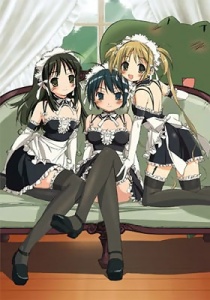 Synopsis: These two sisters, Izumi and Mitsuki, run away from home because their parents won’t allow them to keep their alligator. As luck would have it, the local child millionaire, Yoshitaka, is in need of a few maids after his parents died and left him all their money. Better yet, Yoshitaka is a huge pervert with a costume fetish, and Mitsuki is an evil genius, thus ensuring the that the well developed Izumi never has a dull day.

Pros: Very gag oriented. This show never really relents on its comedy aspects. It’s the type of show that employs the classic mislead technique. No matter how many times it happens, you always think that the show’s sweeter moments are real. Because aesthetically, it screams cliche. But ever single time, it pulls the rug from right under your feet by turning the sweet moment into a funny one. Its all thanks to the duo Yoshitaka and Mitsuki, who constantly torment the protagonist Izumi (her own sister even started a naughty fan page behind her back).

Cons: The endings are repetitive. It always ends with Mitsuki looking at images of that weeks show, and Yoshitaka maliciously designing sexy costumes for next weeks show. This show borders on cliche. Heck, in some lights it may already be too far gone. The animations not impressive and the jokes rely on physical humor and wacky situations (conflicts are usually resolved through Contests). But the core characters manage to save it though their two dimensional selves. Izumi hate perverts, but has a crush on Yoshitaka. Yoshitaka is shallow, but doesn’t want to replace his new maids. Mistuki looks sweet, but is actually a master manipulator. Even innocent looking maid Anna is actually a crazy sex maniac (which is very funny by the way).

Tagged 2005, Anime, He Is My Master, Maid/Butler, rich people