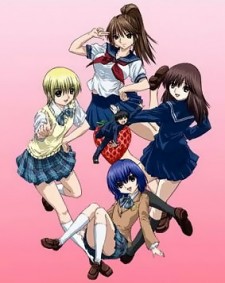 Synopsis: One day, a kid named Manaka Junpei goes to the school roof for a peaceful time, but suddenly gets flashed by some pretty girl’s panties. Feeling a mixture of violation and fascination, Junpei seeks the mysterious girl out. Along the way, he picks up a blonde girlfriend by the pull-up bars. Then he discovers that strawberry panties is actually the local wallflower. Then she gets hot. So Junpei has to balance these two, along with two other girls that can’t seem to get enough of him. We’ve all been there, right?

Pros: I’ll give the show this, it has a surprisingly brisk pace. The plot progresses farther than you would expect a harem-esque show to. It starts with Junpei in middle school, and ends in his second year in high school. We see him get and lose his first girlfriend. The identity of the mystery girl in the first episode is revealed in the second. The tsundere character falls for Junpei in the span of one episode. Most other shows would draw this out for at least two seasons, maybe more. It was also refreshing to see a protagonist who knew he liked all the girls in his life, instead of just acting oblivious to it. So kudos Ichigo 100% for actually making things happen in your show. Kudos.

Cons: Every character in this show is way too sensitive. All the girls are like a second away from bursting into tears. So as you can imagine, it gets a bit overly melodramatic at times. The animation seemed inconsistent at times, and you could really notice the moments where it dips in quality. On a personal note, and I don’t know why, but at times I felt that the plot was seconds away from something incredibly tragic happening. Maybe that was just me.

Watch it?: Excellent for a High School soap opera fix (with some humor too) (3/5)

Cute face. Big boobs. Actual personality. Will she ever get a date?