Type: Not to be confused with Abnormal B or Strange C

Synopsis: Hikari Hanazono is the 2nd Best in the World in the PHA, which I assume stands for the Pacific Headlock-Wrestling Association. Her only real competition is Kei “Nature Boy” Takishima, whom she has never beaten in a big match situation. She had thus become obsessed with gaining what I again assume is a pin-fall or submission victory over him. Before we get to that, however, we have to contend with the other top 5 contenders, or “Special A,” consisting of Psycho Jun, Miss Megumi, Tornado Tadashi, Akira “The Snake” Toudou, and Sin Ryu.

Pros: This show has some pretty solid gags. I especially liked Hikari’s reactions whenever she loses to Takishima and Takishima’s own jealousy/annoyance towards Hikari’s denseness. I’d say the show is at it’s best when it’s trying to be funny with each of the character’s unique foibles. I could have done with way more “Inner Jun” stories. I also liked the pairings that each character eventually get into, and wish they had been introduced way earlier in the series. The comedic potential of these people trying to figure out how to date each other is staggering. In fact, any anime about two people trying to figure out the mechanics of dating sounds enticing.

Cons: Nothing this show does will surprise you. It’s fairly generic and in-line with most romantic high school comedies targeted at girls. Some of the boys are even prettier than the girls. You can gloss over most of the anime without missing much. The show doesn’t distribute it’s attention evenly, putting a disproportionate amount of time on Akira. Just because she’s the only other girl that can talk is not an excuse. I had a bit of a hard time sympathizing with the “Special A” rich people classroom, though to the show’s credit, it does address this fact in the very first episode. As I said above, I would much rather watch a show about 7 weirdo’s love lives rather than a show about rich people having tea in a green house.

Watch it?: If you’ve never watched a High School Love-Comedy aimed at Girls, this is a good place to start. (3/5)

Best Episode: Ep. 11 “Boyfriend-Girlfriend” and Ep. 19 “Singing Voice-Bad Guy” (It should have been just this) 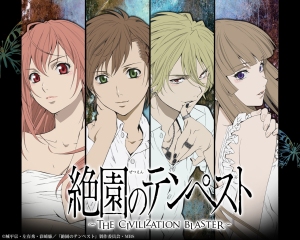 Synopsis: So it turns out that the good tree in the first part is actually the evil tree, and the evil tree is now the good one in the second part. At least, I think that’s what a happened. Anyway, the main guy Yoshino spends the second half traveling with bravado filled turned love sick Hakaze Kurasibe while other main guy Mahiro trains Megumu Hanemura, a character where supposed to care about but don’t really. Oh, and the magic killer trees may be from space.

Pros: The second half of the show if definitely the funniest. I guess that since the show got all that pesky plot out of the way in the first half, they could focus more on humor. Take for instance the time when Hanemura calls Mahiro on his sister complex, which brought me so much joy. This part also treats the topic of Yoshino dating Mahiro’s sister with more maturity than I thought it would have. Speaking of Mahiro’s sister, in ep. 21 we finally get to meet the infamous Fuwa Aika, who tuned out to be way more likable than the flashbacks made her out to be. There’s also a particularly awesome fighting scene in ep. 21 that’s well worth the watch.

Cons: In this half of Blast of Tempest, the scope of the show becomes broader. Civilization is back on track, and the whole cast more or less switch to the same side. This took away from the tension and uniqueness of the first half, and made the rest of the anime seem more cookie cutter. It honestly felt like two entirely different anime. Still confusing and convoluted though.  Then there’s Hanemura, a “chosen one” character that mainly serves as comic relief and has a girlfriend we never meet. I also disliked the portrayal of Hakaze Kurasibe. Once she actually had a physical presence in the plot, she went from a charismatic leader to typical in-love heroine. She weirdly had more agency when she wasn’t around. (Though it was funny that she and her brother had the same style of overthinking.)

Watch it?: You kinda need to for completion’s sake, though Ep. 21 is highly recommended (3/5)

Best Episode: Ep. 21 “Femme Fetale” (I honestly didn’t expect to like Aika that much)

Type: Someone really liked Hamlet and The Tempest

Synopsis: The world is nearly destroyed by these giant fruits that turn people’s skin into metal. This causes these two broskies, Yoshino and Mahiro, to agree to help this magic chick named Hakaze Kurasibe, whose stuck on an island Guilligan’s Island style. If they help her kill a tree to save another tree to save the world, she’ll help them solve the murder of Mahiro’s sister, who was coincidentally bangin’ Yoshino on the side. It’s like Shakespeare himself wrote it.

Pros: Right off the bat, the anime has one speed, GO. The show literally starts at the end of the world, and follows these two best friend’s travel’s through an apocalyptic Japan. I loved this. It was like The Road meets Walking Dead, only with statues instead of zombies. You get high-octane action thanks to the magical element of the show. You also get intense drama thanks to the secret that Yoshino dated Mahiro’s sister behind his back. I really got the sense that Mahiro would have straight up killed Yoshino if he ever found out. Even though the fate of the world was at stake, the story really benefited by focusing so closely on Yoshino and Mahoro. I also really liked the way Hakaze was handled. Her role in leading the boys without actually physically being there made her seem more powerful and important than if she had been walking with them.

Cons: I’ll be honest, I had a hard time keeping track of which tree is suppose to be the evil one. You see, the point of Yoshino and Mahiro’s journey is to help Hakaze stop her clan from reviving the Tree of Exodus, but then is turns out that the Tree of Genesis might be just as bad. Then we learn that these tress are sentient or something, and man, it was hard to keep it all straight. In fact, the show tend to overcomplicate it’s plot more than it should, cough Time Travel cough. It helps if you consider the tree their own characters instead of abstract ideas. Apart from that, I really, really, really, really hated the fact that Mahiro was in love with his sister. Even the whole “we’re not blood, so it’s alright” argument didn’t make it any less creepy. I should also point out that the first episode throws a lot at you, so you may spend an episode or two playing catch up (though Ep. 13 does provide a nice recap).

Saves the world through a wooden waki-talkie

Best Episode: Ep. 8-10 “The Great Forest Debate” (Yoshino bullshits his way into being a hero) 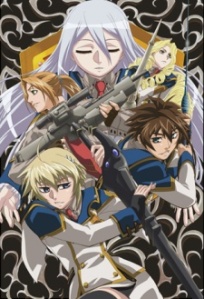 Synopsis: The world had been overrun by giant man-eating insects and the air is so thick with pollution that it burns like acid. But that’s not nearly as important as the happy go lucky lives of Platoon 17, a rag-tag group of student-soldiers with a can do attitude and everything to prove! So get ready for some real crackerjack adventures that totally ignore the harsh realities of the world at large.

Pros: I like the premise. The whole ideal of humanity living in bottled cities and having to train soldiers to compete with other cities for resources on a death planet reads like something out of a science-fiction novel. I also liked the main character Layton for playing the role of a elite soldier trying to walk away from the battlefield. It’s a concept I wish more anime’s played around with. Then there’s Felli, the very rare quiet girl character with an actual personality. Her jealous anger towards Layton always made me laugh.

Cons: In the anime, there’s this side story that pops up intermittently throughout the series where the Japanese voice actors only use English dialogue. They get props for trying, but their thick accents made the segments unwatchable. That aside, the show proper had pacing issues and too vague and random  in certain story plots. For example, in one arc, we learn that the character Sharnid left his former Platoon because…yeah. We don’t really know why. It seems he felt that his team was growing part, so he left them in the middle of a competition, because that would help them reform their friendship? The whole anime is littered with stuff like this. The action is also subpar, and the anime doesn’t play up the dire status of the world nearly as much as it should. I mean really, people should be more worried about the giant bugs outside instead of losing face in silly war games.

Best Episode: Ep.11 “Spa Resort Kalian” (I like to laugh)

Type: No sugar or spice, but still something nice. 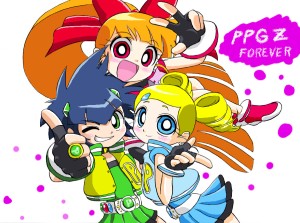 Synopsis: So apparently, someone read my dream journal and created an anime version of the Powerpuff Girls. In this alternate retelling, three unrelated girls are zapped with white energy powered by Chemical Z. Thus, the Powerpuff Girls are born. Using their Hensin-A-Go-Go! powers and totally cute matching outfits, Hyper Blossom, Rolling Bubbles, and Powered Buttercup dedicate their lives to fighting crime and the forces of evil.

Pros: My mind nearly exploded from joy when I discovered that Powerpuff Girls Z existed. Naturally, I had to drop everything and watch the show immediately (I’m sure my fiance will move the wedding to another month). When you think about it, turning the Powerpuff Girls into a Magical Girl-esque anime makes a lot of sense. You already have a leader, ditz, and tomboy right there. From a nostalgia viewpoint, this show was a hoot. It was also fun to see how slightly older versions of the girls would act, though I’m not sure if Blossom would have become quite so boy crazy.

Cons: I’m ganna be frank, this show gets very inane at times. Powerpuff Girls Z was definitely created for younger audiences, which becomes painfully obvious during the “learn a moral” episodes. Basically, whenever the girls have to deal with a younger kid, you might as well skip the segment. So if your not the type of person that can deal with semi-bland 52 episode anime made for children, this is not the show for you.

I have a soft spot for tomboys