Type: Kids continue to do the darndest things 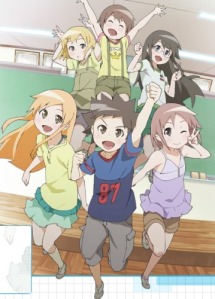 Pros: Much like the OVA before it, I found myself laughing more than once at Today in Class 5-2. This, once again, makes me conflicted because the best gags were dirty jokes. Luckily, since the episodes are now full length, there is a lot of different humor diversify the show. The stone face moments always cracked me up.The series used segment based scenes, giving you about three different stories within an episode. Not only is this an awesome way for slice-of-life comedies to present themselves, but it also allows you to skip over some of the more uncomfortable moments.

Cons: Call me a prude, I don’t care. Having fifth graders in fan-servicy jokes was gross. It also doesn’t say much for the medium when little kids can pull off the same humor and dialogue as the usual teenage anime cast. Some of the OVA scenes were also incorporated into the series. That being said, it is a damn funny show. And for a show with children, there are refreshingly no moral lesson moments.

Watch it?: Still funny, and still makes you feel weird (4/5)