Synopsis: So this is one of those shows were the twist makes it a lot more interesting in hindsight. Saya, a half-demon (I think, they don’t really make it clear), is captured an put in a slice-of-life Truman Show that happens to have man-eating demons. So Soya and the audience is tricked into thinking she’s just a normal small town girl who kills demons at night, until halfway through the show, when shit goes crazy!

Pros: Right off the bat, the fight scenes are the strongest aspect of the show. Go look these up if you can. Saya is a bad-ass, and the demons she fought were pretty cool. In addition, and I can’t believe I’m saying this, but I really liked Saya’s school uniform. I normally don’t notice clothes designs, but the red and black really stood out. On that note, I also liked the contrast between the shojo-like character designs (pale skins, long limbs, stylish hair) and the show’s bloody core. It worked nicely with the plot of the show.

Cons: If you’re not a fan of gore, then you are not a fan of this. It’s called “Blood-C” for a reason. Even my censored version viewing was a bit much. The early episodes of Blood-C are kinda slow, because the first half is dedicated to showing Saya’s school life, and the second to her monster of the week. It’s not until episode 6, when her friends start getting attacked, that that show really gets into high gear. It has a slow manga-esque beginning, which doesn’t really work for an anime with only twelve episodes. As stated above, this is the kind of show that get way more fun to watch if you know the big twist before hand, because you can see how exactly Saya is being tricked. I feel that the show would have been elevated if the events of the entire series had been condensed into eight episodes, with the rest dedicated to the aftermath instead of separating that part into a movie. I really would have liked to spend more time with the “real” Saya.  Also, there’s a talking dog in this and I’m still unclear as to why.

These people look way too cool for this type of show 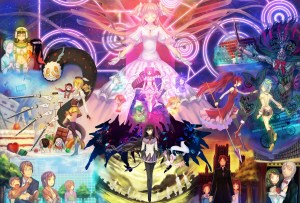 Synopsis: A deconstruction of the magical girl anime sub-genre that subverts stereotype by, wait, sorry, I have snort this ounce of cocaine while listening to this indy cd I bought while eating at a cruelty free thrift shop….and scene. Anyway, by “deconstruct,” I mean that it shows how all the stuff in magical girl shows, like talking cats and enchanted jewelry, are actually sinister.

Pros: All jokes concerning the hipsterness of pretentious critics aside, Medoka Magica is a deconstruction anime. It takes apart the elements of its genre and adds dark connotations to each. Evangelion did it, School Days did it, and probably a bunch of other shows I’m forgetting to mention. Case in point, in Medoka Magica: the cat is cute but creepy, the witches’ rooms are all twisted version of storybook drawings, even the opening has Medoka crying in her Magical Girl dress. There are a lot more, but discussing them would ruin the plot, so have fun catching all the references. Past the analytical aspects of the show, you’re left with killer fighting scenes and pretty imaginative enemies. Seriously, the fights in this are something to behold. Even if you don’t watch the show, you should catch on of these fights on Youtube or something.

Cons: For one, I don’t think the show’s promotional artwork properly conveys the actual tone of the show (though, this too could be part of its deconstructionness). I feel that the main characters were underwritten, with most coming off as two dimensional. Medoka is the modest one, Homura is the cool one, Sayaka is the tomboy, Kyoko is the wild one, and Mami is the wise one. None of them really move past their assigned role, well, maybe Homura and Sayaka. The ending could also be way better, but I’m guessing the series was leaving itself open ended for the movie sequel.

I really loved her fighting style

Synopsis: So its been a while, but from what I can remember, this pervert wanted a harem like his cousin, so he made a deal with a fox spirit. The spirit tricked him into being her servant instead. Blah, blah, blah, we skip to a half-hour “movie” where perverts are being rounded up. That’s honestly about it.

Pros: It’s only half and hour. It’s more of an ova than movie. There’s this one scene where all the girls strip down to their underwear. Everyone seems a lot cooler with one another, and at the end two naked men hug on a bridge.

Cons: A movie isn’t thirty minutes. TV really has to understand that “movies” should be at least 80 minutes or higher. Here’s the story: Karina is dead. Keita thinks its something bigger. All the perverts are being rounded up. A giant robot appears. Karina come back from the dead. The end. It’s still Inukami, and Inukami is Inukami.

Him being dead was delightful

Type: Not gross, but sometimes bordering

Synopsis: Here’s a story of two lovely ladies, high school students with very slender bodies. Then one day these ladies met this fellow, and they knew it was much more than a hunch. They could in fact be related, although that would cut out any naughty stuff. So they decided to form a family, at least until they figured out who could bone each other without incurring the wrath of God.

Pros: Not as bad as I though I was going to be. You see, in the first ten minutes of the show, each of the main characters are gloomy, and one of them is even assaulted as her introduction. So I thought this was going to be one of those anime. You know the ones. Luckily, everything gets a lot more lighthearted afterwards. The plot of the show is that these two girls (Miina and Karen) move in with a boy named Mike because they believe one of them could be his twin sister. After that, mild hijinks ensue until the mystery is resolved. Because this is anime, the characters aren’t allowed to simply get a blood test, but must wait until they remember whose related to who.

Cons: Aside from the obvious blood test thing, I found myself not caring about any of the supporting characters. I think that show’s plot was straightforward enough to allow the three main characters to carry the show by themselves. Everything else felt like filler. There’s also Episode 5, which has the girls trying to “fix” Mike when they hear a rumor that he’s gay. This was troubling to say the least, although I guess you can’t really judge the writer’s ignorance way back in…2003? Mike’s also a pretty bland character, as are most of the show’s stories.

Watch it?: At least the girls agreed that the related one couldn’t also date Mike. Kudos. (3/5)

They never did explain what his deal was

Synopsis: In the future, society (or possibly just Japan) is regulated by the “Sybill System,” which determines who is mentally fit to remain in society. But if you’re likely to commit a crime, can think like a criminal, or even had a bad day and thought about burning your boss alive, you are screwed. It also turns out that some people can totally bypass the Sybill System and commit crimes while seemingly having a low Crime Coefficient. We call these people sociopaths. That’s were rookie detective Akane and her group of criminally minded Enforcers come in.

Pros: This anime is a pretty straight forward sci-fi crime thriller. Sorta like Blade Runner (0r Equailibrium if you’re really nerdy), but not as subtle. What starts as a crime story soon evolves into a larger issue involving the age old topic of peace vs. free will. On the “peace” side you have Akane, a new detective whose thrown into the morally grey world of police work. She is accompanied by “Enforcers,” people who have been deemed potential criminals and work alongside the police to prevent real cops from having to think like criminals. This is an obvious flaw in the Sybill System right off, and from here the show builds an even larger story. Through the Enforcer’s work and the cases they tackle, we see how messed up society still is, even with the Sybill System. If I had more time, I’d probably mention the themes of technology, surveillance, repression, and the like. This is a show that’s not really afraid to go there, in terms of depictions and story events, and I appreciated that.

Cons: This show is pretty violent. But it’s not the normal cinematic violence, or even the over the top and gruesome anime violence. Pyscho Pass employs more of a casual, matter-of-fact violence that is quite disturbing. I myself had to look a way a few times. I’d also have to say that most of the supporting characters were underwritten, with most of the effort going towards portraying the antagonists of the show. Don’t get me wrong, they were fascinating antagonists, but I wound up not caring that much about any of the enforcers except Kogami and Tomomi. The ending was also bitter sweet, implying that nothing was really resolved in the end. That’s not a bad thing in terms of storytelling, but it is a bummer. (P.S. Akane is Criminally Asymtomatic, right? I mean, that’s pretty much implied here? Can we talk, or can we talk?)

Best Episode: Ep. 15 “The Town Where Sulfur Falls” (this really bothered me, so it must be good)