Type: Why won’t anyone let these crazy kids be together!?

Synopsis: A young sky pirate-in-training one day accidentally stumbles upon a legendary “Eldel Raid,” a specifically female race (because anime) that can transform into weapons. They’re mostly an exploited race (because patriarchy), and everyone really wants to exploit this super rare girl for their own purposes. In hindsight, they could have just asked her to join their side instead of trying to force her. It wouldn’t have been difficult. She barely woke up from years of sleep, so she was probably super impressionable. Ew, that sounded kinda gross. Double ew, pointing out how gross it was only made it more gross.

Pros: This is either a super good average anime, or an average super good anime. The animation is right at the middle, and the story is fairly predictable. But for the life of me, I couldn’t help but get invested in the story. Maybe the slight repetitiveness of key plot points did it. In almost every episode, Ren is nearly kidnapped, or Elder Raid is abused, or Cou bonds with Ren more. The constant hammering of the Elder Raid plight as second class citizens and the various situations that could manifest as also helped. Or maybe I just had a light-hearted adventure ich that needed scratching. Whatever the case, I found myself really rooting for Cou and Ren’s relationship to thrive, and was a little anxious when a potential problem occurred (like Ren nearly being kidnapped a lot). The show’s also pretty funny in that older anime style, with gags and off-comment ribbing that’s really been lost in recent years.

Cons: I watched this in a huge chunk, so my own opinions could have a bit of bias. The anime is very bye the books, meaning that if you have a good-ish handle on manga stories, you’ll know what will happen. As mentioned above, the animation is nothing to write home about, and neither is the action. And while the story does its best for explore the different relationships between humans and Elder Raids, from abusive partners to separated lovers, some of the story arcs drag on a bit. The last arc, for example, was six episodes. The show also never explained what where the Elder Raid come from, why they were only women, or why they can live for so long.

Funny and based on a Darkstaker’s character

Type: It’s weird, but it’s almost like I’ve heard this title before…

Synopsis: Set one year after the events of Steins;Gate, the mad scientist Kyoma Hooin, or Rintaro Okabe, is now unstuck in time after he and his friends accidentally created a time machine. It falls to his sorta girlfriend, but not really, they annoy each other but still make out sometimes, Kurisu Makise to saves his temporal existence. Now if she could only figure out a way to make him open up that doesn’t involve wreaking the space-time continuum.

Pros: Once again, I am a sucker for time travel, so I naturally liked this movie. One of the things that distinguished this movie from it’s anime progenitor was it’s lead. Although a third of the movie takes place from Okabe’s point of view, this is very much Kurisu’s movie. She’s basically put into the same circumstance that Okabe dealt with in the anime, having to use time travel to save a loved one. I loved her reaction to this. Being more of a pragmatist than Okabe, Kurisu carefully analysis the problem, and her resolve flip-flop between her brain and her heart. Her having to deal with the complex and negative consequences of time travel herself, like Okabe before her, puts her in a much for equal footing with Okabe, making the partnership and eventual romance they developed in Steins;Gate feel all the more genuine.

Cons: Aside form the lead, their’s nothing much to distinguish this movie from the anime. The animations is about the same quality, which is weird considering that the animation is usually the first thing to be upgraded in anime movies. The story is also very in line with the anime, making the movie seem more like a OVA than feature film. I’m not saying that the film had to go to Back to the Future-esque adventures, but something bigger would have been more appropriate. Maybe a prequel movie detailing the original Suzuha’s life in the dystopic future would have been better. I’m not saying I didn’t like this movie, because I did. I love Steins;Gate, both in the Japanese and English dub, and I loved Kurisu’s story, its just that the Steins;Gate “movie” didn’t feel much like a movie to me.

Watch it?: Yes, because Kurisu’s adventure is worth watching.

Best Moment: When Suzuha put on Daru’s Hat (I fan girled out like crazy when that happened) 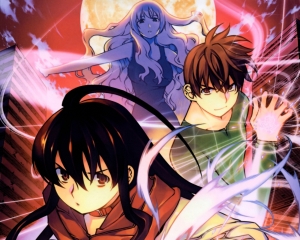 Synopsis: [Inhale] Thousands of years ago a group of mystical beings called the “Tera Guardians” and Humankind sealed away an evil god called the Masagami. As punishment, the god placed a curse on Humans called the Doppeliner System, which causes a person to die if he/she meets their doppleganger. The god also cursed the Terra Guardians by reincarnating a portion of itself in their royal bloodline, causing them to kill one member every generation. In order to stop all this and protect his sister from execution, Prince Renshin sets out to revive the god and finally kill it. This sets up the whole plot, and would have made a fuck ton more sense if it was explained right away instead of diddling itself for twelve episodes [exhale].

Pros: There’s something in this show. There’s a slight sliver of potential for something greater, but it never quiet reached it. For example, Keita was reluctant to join Kuro early on because it was dangerous, which is something not many protagonists do. I really found the Doppeliner System very intriguing, and a whole show could have been made around the idea that meeting your doppleganger causes your death. That’s why I found the few episodes of season 2 (ep.13-16) the most interesting. In fact, season 2, or the second half, of the show was far in a way better than season 1. There’s a time skip, friends became enemies, enemies became friends, twists occur, and the motivating factors for the plot were revealed. Kuro became a much more capable fighter in season 2, and the show as a whole seemed to have more energy. The credits even did this cool thing where it would update depending on who was the antagonist was at the time. It didn’t need to do that, but it did. There’s a fight in every episode, which can get a bit repetitive, and some characters aren’t full fleshed out, but the relationship that eventually develops between Kura and Keita hold it together.

Cons: The first half was bad, largely because Kuro and Keita didn’t contribute much in the final fight, and the Tera Guardians were boring. I could care less about the whole “Pure Land” story, which is sadly the main plot. I even willing to give it a pass in season 2, when the Terra Guardians were relegated to leftover antagonists after the defeat of Renshin in season 1. On that note, let’s talk about Renshin. In the show, he’s revealed to be a dark hero, someone who did evil things for a noble reason. Except, it didn’t make any sense why he kept his motivations secret or vague. Why didn’t he ever say “Hey Kuro, the clan was going to kill you because you’re the reincarnation of an evil god, but I talked to mom, and we decided that I’m going fight the evil god myself and free us and humanity from our curse fate. So to summarize: I’m good, clan’s evil, let’s have ramen.” Renshin’s motives were kept secretive for superficial dramatic purposes only, which is why it felt forced and nonsensical. I did, however, like his dumb rock song that played during his fights. Other than that, I felt that Kuro got beat up way too much in season 1, its kinda too violent in places, the the supporting characters were underwritten, and that the entire thing felt rushed. Since this is based on a manga, it’s safe to assume that the writers tried to pack in as much as they could in 23 episodes, which is why I think season 1 is generally lacking.

Watch it?: The second half is genuinely better (3/5)

She should have had at least one episode to herself.

Type: It means destiny between people

Summary: Set two years after the events of season 1, Kaoru and his assortment of female friends have seemingly discovered the secret to eternal youth. Despite living through 730 days, not one of them has aged, grown, or even changed their hair style. In fact, the only evidence of this supposed time jump is Kaoru’s status as a “grad student.”  Are these people stuck in some sort of perpetual time lock, forever doomed to 20 something bodies with smooth skin and great health? Or were the character designers just lazy?

Pros: This season of Aoshi is only twelve episodes, and has much less of the melodrama that hooked me the first time. This season is more of a classic harem show. One episode per girl, a beach trip, a spa trip, and even a haunted house trip. A bit more focus in put on Chika, but that’s probably to make for her late entry in the original. A interesting development happens towards the end of the season when Tina’s status as an culturally Japanese American is explored. Tina is native to the US, but spend most of her life in Japan, making her feel out of place in both nations. I kinda wish this had been the through line for the entire season, if just to distinguish more from its predecessor. Also, I might have forgotten this before, but I like the fact that most of the characters here are college age. It makes their occasional beer fest understandable, and it helps move Kaoru and Aoi’s relationship along.

Cons: Since this season was shorter, a lot less attention was given to Kaoru’s relationship with Taeko and the Miyabi. There more or less relegated to background characters in favor of Chika and Tina. And even when they did show up, it was usually as part of the larger group. This season is a lot more haremy than the last one. Some effort is put into trying to make the season about Kaoru worrying about his future, since he is a grad student and all, but nothing really becomes of it. It was also very weird that after two years, not one of the women in the household looked any older. Or any different for that matter. Are you actually trying to tell me that out of about seven people, six of them being young women, two being high school age, not one of them tried a different hair style? Come on.

Watch it?: Totally skippable, except maybe the last three episodes (3/5)

Hey man, culturally Japanese or whatever, you’ll always have a home here in the States.

Best Episode: Ep. 9 White (they totally did it. right?)