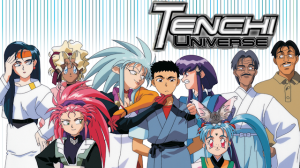 Synopsis: Ah man, now this take me back. The life of an Earth boy named Tenchi is turned upside down by the great Space Pirate Ryoko, the Princess Ayeka, her sister Sasami, the Galaxy Policewomen Mihoshi and Kiyone, and Washu, the greatest mad scientist in the universe! And unlike the original, they get into way more hijinks this time around. Some on Earth, some in Space, some is PARALLEL DIMENSIONS!

Pros: Ok, so its going to be hard for me to review this, because Tenchi Muyo was the first anime reviewed on this site. The entire franchise has a fond place in my heart, flaws and all. Tenchi Univese is a proper 26 episode anime, unlike the original that came out sporadically in OVAs. The story and relationships are largely the same, ending with Tenchi’s battle with Kagato, but it has some minor tweaks. For example, in this show, Mihoshi plays a larger part, and was actually introduced alongside Ryoko in the firs episode. Ryoko is also a lot more mischievous in this iteration. The overall tone is more slice of life, and the inclusion of Mihoshi’s exasperated partner Kiyone opens up some Laverne and Shirley-esque stories. As much as I love the original, anyone looking to see what Tenchi Muyo is about should really start here.

Cons: I felt that the last arc was a bit too long. It depicts the invasion of Jurei, which is cool considering that in the original, Ryoko was on the run for invading Jurei. A nice reversal there. But still, it took a little long to get to the fireworks factory, you know? Some fans may notice characters like Ayeka and Washu getting a bit short changed, and Ryoko no longer has anything to do with Washu, Jurei,or Kagato. But yeah, I can’t really point out any major flaws. Even the mid-90’s voice acting was stellar.

Even though Ryoko is still boss, these two GXP ladies stole the show