Type: Too little, Too late

Synopsis: Three seasons later and the plot finally arrives! Yuji has teamed up with a snake god to make a new world for the human eating demons he calls “Tomo….something.” The Flame Hazels are real assholes about it and refuse to let the demons have a new world. Shana ends up fighting Yuji, because even though she’s still in love with him, she ain’t ganna let no man tell her what to do. You go girl.

Pros: F#$ing FINALLY! After sloshing through the garbage of the first two season, we finally get to the good part. This season introduces the full forces of both the Flame Hazel and Bal Masque as they fight a world wide war. Where introduced to a lot of cool looking Flame Hazel and Bal Masque Tomogara. It’s basically franchise’s Return of the King. I just wish this had happened sooner. The most interesting part, as always, is the relationship between Shana and Yuji. Graduating from useless to fascinating, Yuji willingly sacrifices everything to create a peaceful world. Shana, to her credit, stays true to her role as a Flame Hazel, opposing Yuji’s plan. I will give the franchise this, they did a great job of making Shana a strong heroine, escaping the trappings that her moe-design suggested. There’s an interesting story here, and maybe in the future, someone will know how to tell it properly.

Cons: This season is good in the way that finding a completely wrapped candy bar in the garbage is good. You’ll eat the candy, but the faint smell of garbage will stay with you. This season did almost everything I’ve wanted the series to do. I did away with the boring high school cast and setting, it introduced ways more about the Flame Hazel, it made Bal Masque interesting, and it make Yuji cooler. But it’s simply not enough. And sadly, you can’t really watch this one without watching the last two season. Even that won’t clear up some of the confusion. The show introduces all these new Flame Hazel that were suppose to care about in one go. But I don’t know these people. I haven’t followed them for three season. Why should I care what a nun and army guy think about?  Who are they to say that the Tomogara can’t have a new home? That’s another thing, the show did a poor job at explaining exactly why the Tomogara getting a new home was such a problem to the Flame Hazel. All I got from it was that the Flame Hazel condescendingly thought they knew better than the Tomogara and didn’t trust them. Very First World vs. Third World. So naturally, I found myself rooting for the Tomogara. Finally, being the last season, I feel that the writers tried to cram as many light novel characters as they could, which never, ever works. They also tried to tie the loose end of Yoshida and Pheles/Johan, three characters I literally hate.

Finally worth our time

Shakugan no Shana-tan [Month of Shana]

Synopsis: Reviewing this instead of Shakigan no Shana S, because CHIBI!!!!

Pros: Shana-tan is basically all the criticisms of the Shakigan no Shana series condensed into 5 minute shorts. These little segments make very self-referencial jokes at it’s own expense, noting the flaws of the parent series. The most obvious example is Shana, who is depicted as an immature chibi character. Another is Kazumi, how here is a two-face character whose actually very snarky in private (a major upgrade in my opinion). Comments are also made about the show’s lackluster supporting cast and confusing terminology. While I personally wise this was the main show instead, I know that’s just a pipe dream and enjoy what I got.

Cons: Aside from this not being the main series, it does have one major flaw. In order for you to enjoy Shana-tan, you will have had to have sat through Shakugan no Shana proper. You will not get the majority of the jokes otherwise. They may also be DVD exclusive, but that’s what the internet is for. (P.S. For those curious, Shakugan no Shana S is an OVA series, 4 episodes, one involves body switching, and the last two are a prequel adventure starring Shana).

She went from one of my least favorite characters, to my most favorite

Best Episode: The Entire Series (their, like, 5 minutes each)

Type: The struggle is real 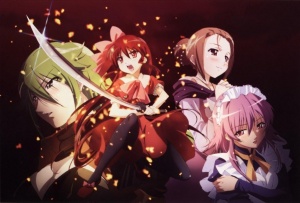 Synopsis: New season, new animation, same boring supporting characters. Yuji gets to become less worthless. Margery gets a bit of backstory. Shana stays, well, she’s still Shana. Burning eyes and all. She should really get that checked out.

Pros: So this season is more or less a continuation of last season. It’s more plot focus this time around. The first season was mainly focused on introducing and developing character relationships, while this season is more focused on introducing story specific revelations. For example, Yuji gets a power up because of the thing inside his chest, which is revealed to have been created by an ancient couple for smooching purposes. He also has “silver flames,” which ties him into Margery’s backstory and finally gives her character an excuse to stick around. Even though the anime still fluffs about with some filler episodes, fans of the show’s world building will like this season. And the anime got a major upgrade.

Cons: I am getting progressively angrier at this series. It’s starting to become a problem. I simply do not care enough about the supporting characters or main villains. How gives a F#$$ about Margery has her boy crew? Because I do not. WHY ARE THEY HERE???? It feel that the show creators just wanted a busty blonde around. Truthfully, if they had their own side series, I’d be fine, but their inclusion in these series really ticks me off. They take time away from Shana and Yuiji, who are all I really care about. Although, turning Yuji from just a random guy into a psudo chosen one is pushing it. And I kind miss Shana’s animosity with Kazumi. In this season, they become friendly rivals and compete over Yuji. It was all very early high school. The first arc is also predictable, and the last arc was unnecessary. It should have finished with the fight with the super assassin.

She takes on a super assassin by herself, while injured, and protecting someone. Badass.

Shankugan no Shana [Month of Shana]

Synopsis: A lot of confusing words are used to describe not-demon hunters who hunt down not-demons and not-vampires who eat human not-souls. This story stars a particularly not-developed “Flame Haze,” or not-demon hunter, who meets a recently not-ghosted boy named Yuji. Together, they fight not-monsters, go through puberty together, and sometimes waste their time in boring school with boring people and generally waste all our time.

Pros: So Shakugan no Shana is apparently a HUGE series, spanning multiple seasons. The first season mainly introduces all the characters and sets the foundation of their interactions. The two star performances come from the two stars, Shana the Flame Haze and Yuji. Shana was raised a warrior, but lack many of the social and emotional skills necessary to function in society. She’s not deadpan or quiet, she’s just a little rough with interacting. Sometimes this is funny, like all her bored expressions while at school. It was particularly fascinating how the adults in her life addressed this. Her sorta dad/necklace of power and sorta mom/maid didn’t view this as a problem, but Yuji’s mother/social mentor pointed out that if Shana doesn’t learn how to deal with people as as child, it will be a serious problem as an adult, especially when dealing with men. Then there’s Yuji, who becomes a Torch (basically a ghost), and is our introduction to Shana’s work. He suffers from momentary existential crises. The best part of the show is their interactions with one another. Their relationship is great to watch, in a “First time Boyfriend and Girlfriend” kind a way. So expect a few misunderstandings.

Con: You can tell right away that this show had a budget. I’m not talking about looking different become it comes from the pre-digital era, I’m saying you can notice cuts here and there made to save money. The exception is Shana’s Flame Haze form, which always looked really cool with the added floating ember effect put in. There’s also the matter of the side characters. Other than Yuji, Shana, everyone else was pointless. I simply did not care about Yuji’s school friends. Ike and Kazumi could go F@#$ off for all I care. They are not important. Kazumi does throw a love triangle wrench at Yuji and Shana, but a random new character that goes away after three episodes could have done the same. Then there’s the matter of Margery, Eita, and Keisaku, who I’m pretty sure are just their for filler. They add nothing to the story, and aren’t really related to the overall plot other than Margery being a Flame Haze. For real, they don’t hang out with Yuji or Shana, they have no real history with Yuji or Shana, and aside from going to the same school and I guess sharing the same plane of existence, they are not relevant. That, I feel, is the show’s biggest flaw. It’s 24 episode length meant filling it with a bunch of filler content, such as school events and side fights, that just acted as fodder for the skip button.But if you can, I’d advise looking for the Bonus mini-episodes. They put a very funny spin on some of the cliches.

Burning Red Hair and A Black Trench Coat with the Collar Popped Up. Bad Ass.