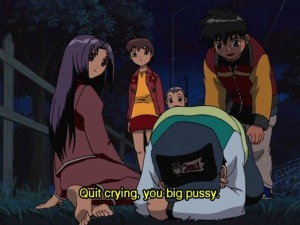 Synopsis: ADV Films, in a moment of sheer brilliance, decided to take a very basic anime series and give it the ol’ “lets get weird” treatment. The result? 19 episodes of racist, sexist, and homophobic comedy. Enjoy!

Pros: This anime is infamous, infamous, for its English Dub. The story is that Aniplex, who had the license for Ghost Stories, tried desperately to find a distributor. But the Japanese version really, really, really sucked. They finally sold it to ADV Films for cheap, given them permission to do anything with it as long as it sells. Deciding to make Gold out of goat sh#t, ADV Films let its producers and voice actors go nuts. AND THEY DID. Every episode is a joke episode. A hard R comedy. No taboo is left untouched. This is an Abridged Anime series that happens to be licensed. You need to watch this, if just to experience this very abnormal event in North American Anime history.

Cons: I was not being hyperbolic when I described this show. When I say the filter was off, I mean that the filter was off. Every episode has at least one horrible racist, sexist, and/or homophobic remark. One of the characters is described as their “retarded little mascot.” If you’re easily offended by that type of humor, and I would totally understand and praise you if your were, then do not watch this show. If you’re the type of person who loves jokes like the one about the Gay dentist, then your shouldn’t watch the show either, you homophobic f@ck. Don’t enable your ignorance. But for the rest of us, especially long time anime fans, this is a treat.

Watch it?: Oh yeah, the plot is about 5th graders fighting ghosts (4/5)

Best Episode: Just give it 4 minutes (then you decide) 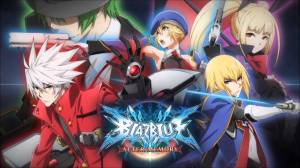 Synopsis: OK, anime fighting game plots. Yeesh. From what I could gather from the Wiki, a long time ago humans made a God in order to control time. This backfired, so they created a second God to kill the first God. This resulted in a time distortion and an evil organization trying to take take over all timelines. Then, there’s Ragna the Bloodedge’s story, the most wanted man alive who destroys government facilities after his brother betrayed him and took their sister, only to run into several artificial girls that look just like his sister, and one of them maybe or maybe not fusing with him to become the terrible monster of legend because of a time loop. Oh yeah, time loops.

Pros: I know I’ve been watching more and more anime based on video games. It’s not really on purpose, I’m just curious about them. Since most anime don’t adapt culturally relevant stories for me (cause I ain’t Japanese), video game stories that I’m familiar with are a nice compromise. That being said, I know that anime based on video games is for a very niche audience, and I wanted to experience that, hence BlazBlue, a fighting game franchise I know nothing about. Admittedly, the anime came off as confusing at first, but by the midpoint, it got me invested enough in the characters to do some research in the Wiki. Like most fighting game stories, the strong points are the characters, not the overall story (which is messy as F@#$). I really liked the Nu androids, and Noel’s story with her friends and military career, and felt they should have been the main focus. Ragna’s story is alright (but grouchy), especially when you delve deeper into it, but I feel he would have worked better as a cool secondary protagonist. He could still save the day, but not be the main focus. And Terumi, for as much as I wanted to punch the smug assh#$$ in the face several times over, was a very effective antagonist. I also liked Rachel Alucard, being the first “young girl aristocrat” troupe character that I liked.

Cons: The story. Just, just give up on it. It’s an anime story on top of a fighting game story. It never had a chance. Anime type stories in games are rarely coherent because they usually have to go on much longer than for TV. It’s obviously harder to keep a story straight if you have to stretch it for a long time. Add to that, however, the fact that this is a fighting game franchise, which often gives each of it’s characters a story line, stories that don’t often mesh well as a whole. And the main conceit of the plot is Time Manipulation. Time Manipulation! The anime also tries to condense what I believe is the first plot of the game in an anime, which means a lot of characters that don’t get a lot of breathing room are introduced, discarded, or simply ignored. And it would simply take too long to nitpick at why certain characters do or don’t do certain things (Why doesn’t Jubei kill Terumi? Why is Jin so insane? Is the reason why Rachel saved Ragna because of the Time Loop? Was Tsubaki such a good friend if she was more willing to kill her best friend instead of the boy who didn’t even like her? And if Ragna falls in love with a robot that looks just like his sister, does that mean he want’s to bang his sister?)

Best Episode: Ep.8 “The Mechanical Soul” (Ragna come off as nice for the first time) 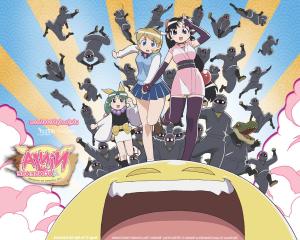 Synopsis: It’s about Ninjas…who do nonsense.

Pros: I watched this because I had nothing better to do. But you kinda want to watch this when you have nothing better to do. This is great background noise. Something you can put on when you want to do something else. Most episodes are stand alone, and being a gag comedy, the plot is a non-issue. Onsokumaru is the comedic heavy hitter, the Steve Urkel if you will. You tune in to see him and his perverted antics. Milage may vary in terms of tolerance, but he’s more good than bad. This is a comedy based on ninja, so some of the jokes are: an army of ninja that aren’t very good, Shinobu the female ninja who isn’t very good, etc.

Cons: This is a very throw away anime. You could watch it, you could not watch it, and your overall net life experience won’t change much. There was a point in the anime when the show hint at some “mysterious” secret involving Shinobu, and I (despite knowing better) fell for it. For a minute, I thought the battle depicted in the opening was going to happen, and all the characters were going to show their cool side. Nope. It’s not that kind of show. It’s a straight silly comedy from the early 2000’s. Fan service jokes. Gag heavy. Cartoony. 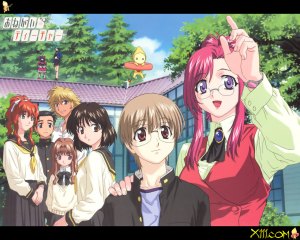 Synopsis: A boy gets marries his hot teacher. Gross right? Except that the boys is totally 18 you guys. For serious. Just ignore the height difference and all the times he calls her “ma’am.”

Pros: Please Teacher! is actually the parent series of Please Twins! That’s a little factoid for ya. The series leans towards the soap opera side of drama, which love triangles and mysterious diseases and what not. But that’s kinda what makes it enjoyable. It hits that sweet spot of melodramatic enough to be engaging, but not melodramatic enough to bum you out. The main conflict stems from the main character Kei having to marry his new teacher/straight up alien Mizuho. I liked that the show depicted the more realistic consequences so such a decision. In fact, the only reason they got married was because Mizuho and Kei were found in a compromising position and Mizuho would have lost her job (cause she’s a teacher, and he’s a student). They can get married because Kei is technically 18 (more on that later), and they begin to live together. From their, we see the growing pains that most couples go through, from dealing with different schedules to feeling of jealousy. Added problems are introduced because of the couple’s age difference and having to keep their marriage a secret. Maybe it’s because I’m getting older, but I really liked the exploration of a couple living their day to day lives.

Cons: Please Teacher! has the problem of having too many plot points. It has a secret marriage, a couple still learning about each other, a love triangle, a second couple, a mysterious disease, a second person with a mysterious disease, an aunt and uncle who can’t stop boning. Oh yeah, and the fact that Mizuho is an ALIEN FROM OUTER SPACE. And weirdly, the show choose to focus on the teacher angle over the alien angle. So it was a little uncomfortable whenever the show reminds us that this student is married to his teacher. When its revealed that Mizuho was an alien, I was expecting a comedy along the lines of Tenchi Muyo. And while there is humor here, it’s more of a subtle humor. Watch the show’s OVA to see what I was initially expecting. But Mizuho being an alien isn’t all that crucial to the plot, it felt superflous. I know it’s used to set up her marriage with Kei, but you could easily rewrite those series of events without the alien gimmick. She was already Kei’s neighbor, and his “stand still” disease could have made her an old friend if you wanted something more exotic. On that front, the show doesn’t do a good job at explaining “stand stills.” All we know is that it’s a condition that causes people to go into temporary comas. Kei was stuck in one for 3 years, hence why he’s 18. But it also appears to stunt your growth? Or is Kei just short? But what about Ichigo? She’s 21, but looks 12. And while we’re on the topic of ages, man Kei, you gatta stop calling your wife “ma’am” and “Ms.Mizuho.” It’s a little weird.

Once they say “I love you” their marriage becomes kinda cute 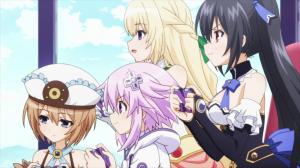 Pros: Look, I’m a big gaming nerd, so I can’t say I didn’t find some enjoyment from this series. The whole “Hyperdimensional Neptunia” franchise is a real gaming franchise that parodies the game industry from a Japanese viewpoint. It was fun to see the Playstation and the Wii and the Xbox as”real people.” We even get the 3ds! I was a little thrown off that Sega was included, mostly because Sega doesn’t make consoles anymore. But Neptunia was my favorite character, so I give that a pass. I also really enjoyed the little verbal easter eggs that were dropped. The action was pretty good, and my favorite segments were the slice-of-life moments that were used 2 out of 3 times.

Cons: First off, if you don’t know anything about gaming, you’ll still enjoy this. If anything, the amount of fan service will probably keep more viewers away than the premise. The story is….alright. It starts off with a “Friendship Pact” between the four gaming nations after years of war. I liked that aspect of it, with the second to last arc exploring what a console war would look like. Since I love gaming, I was a little disappointed with some character choices. I thought the Nintendo Analog should have been different. Older. Like a “Bancho” style character, as Nintendo is the oldest company still making consoles. But instead, she was depicted as a “flat chested” quiet/mean character. That’s a pretty weird depiction for the company that saved the game industry. And where was the Gameboy? Or Dreamcast? Or any of the older consoles? Did they just disappear? Did they transform? What’s the deal here.  I also really hated Peashy, a bratty child character added about three episodes in. She was ANNOYING and full of herself. I wonder why the analog for PC gaming would be characterized as rude, foul mouthed, immature, and trollish……

Watch it?: I am genuinely surprised automobiles haven’t been given this treatment (3/5)

Based on the canceled Sega Neptune