Type: “Every moment I live, is agony” -Kazuma Sato 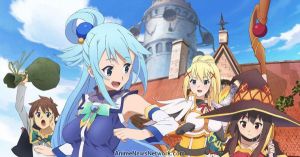 Synopsis: One day, a kid dies in an extremely hilarious way, as all child deaths tend to go. His spirit is given the chance to reincarnate in a fantasy world, but it turns out any world he lives in will suck. His closest friend is a goddess, who does nothing but build up huge debts and complain. His most powerful ally is a magician who only knows 1 spell that she can only use once. And this most loyal comrade is a beautiful knight…who has a masochism fetish. Only in 2016 could someone be sent to a magical world, be given a harem of beautiful women, and still have to live in a staple full of horse manure.

Pros: KonoSuba was hailed as the best comedy anime of 2016.  And it is. The core group and the show are funny. Go watch it.

Cons: First off, the show is really hard to talk about because it is chalk full of references, running gags, and subtle jokes. This show takes all the potential melodrama or a game/fantasy/light novel series and laughs in the face of it. The characters are selfish, cowardly, pervy, petty, and we love them for it! If I really tried, I could dissect the deep level of parody this show exhibits…Lucky for me I’m doing this for free and thus have no real quality requirement for these reviews. Take it or leave it suckers! (Please don’t leave it, this is all I have!!!!). So instead of detailing the good, let’s focus on the bad. The show is a slice-of-life comedy, with no real end. The show even admits it, calling the season’s 10 episodes a “tutorial.” Except for the first episode and meeting Darkness and Megumin, it’s literally just a bunch of stuff that happened. Some characters show up. Some characters are rushed through. I think the show was working within some limited time and budget constraints. The show would be perfect if it didn’t feel like you were only scratching the surface at a much larger story (though I am strongly tempted to read the light novels, a first for me). I also found Darkness and Megumin a bit one-dimensional in terms of comedy. More so Megumin, as her main joke was that she used up all her magic in a powerful spell, but she can only use it once a day. Noticeably, the show used her spell incantations to eat up some air time. Darkness, on the other hand, is technically a little more complex. She’s a noble knight who not so secretly fantasizes of being ravished and humiliated, or at least beat up by monsters. But she’s also used a fan service, being the stereotypical blonde knight with big boobs. The fan service is pretty good. A little boob centric to be original, though I do love the fact that no one ever mentions that Aqua is going commando. The show’s setting doesn’t change either, being set in city for beginner characters. Though, I suppose this is not different than a show being set in Tokyo or something.

Watch it: Kudos to Aqua’s voice actress, Sora Amamiya, for delivering possibly the best whining I have ever heard in an anime (4/5)

I never thought I’d say this, but this woman’s tears brought me so much joy

Best Episode: Hell, just watch all of it. (They are all gold).