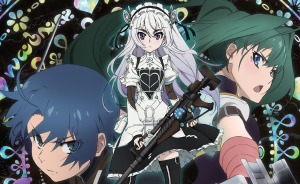 Synopsis: A not as cool as you think with the name COFFIN PRINCESS girl is on the search for the remains of her evil Wizard Emperor Dad so she can bury them. I mean, it’s not like an evil Wizard Emperor would ever do something messed up to his own body parts….She ends up hiring two saboteurs to help her along the way. Now, why  the people hiding the body parts didn’t just give the Coffin Princess and her friends decoy body parts is another story. I guess they don’t want anything to compromise their bragging rights of owning the shin of the last great Wizard Emperor.

Pros: As anime based on light novels that don’t really have a definitive ending goes, this was pretty fun. The action’s good, the animation’s good, and the characters are good. Well, some of them are good. Mainly the three leads, Chaika, Toru, and Akira. Chaika speaks in broken Yoda speak, which made her a little more of a unique moe character. Toru break away from the typical whiny or mary sue mold for male leads by having actual motivations and opinions. For example, the initial reason he joined Chaika is because she promised him more battles, which really appealed to him as a sabateour (basically a ninja) in peace time. And Akira was a great comedic stoic, even if her love for her unmotivated “brother” is well worn material. The trio’s journey to find the missing body parts of the dead emperor is a great frame for world building, and we get to meet a lot of interesting characters. Not to mention that the fights in this are pretty well made, Toru and friends usually end up out thinking their opponents rather than trying to overpower them. Hell, one of the last fights ends with a subtle stabbing. (p.s. This anime also has one of the grossest moments I’ve ever seen. It’s in the last episode. Only in anime!)

Cons: The plot for this anime is fairly predictable. Once the second “Chaika” is introduced, you pretty much know what’s going to happen. Hell, the anime even opens with “Chaika” being given an ominous warning. To save you the 2 seconds it would take to figure it out: Chaika is one of several clones created by the late Emperor to collect his remains in the even of his death. This is most likely so he can resurrect himself and get revenge or whatever. The different versions of Chaika are cool, as they each amass a different type of entourage. What’s actually holding the anime back more are the “Gillett Corps,” the shows main “antagonists” who are following Chaika and friends. They’re made up of 2 other lolitas and other boring people. I actually skipped the scenes where they showed up, and lost almost zero events that were plot relevant. It’s almost like Chaika and friends were so charismatic, that the author has to throw in dead weight to balance it out. Speaking of Chaika and friends, I’ve stated above that I really like Toru. He’s a more introspective and tactial lead than I’m use to. But his status is hurt by the story giving him the stereotypical origin of having a sweet girl die in his past, thus motivating his training and skills, and his secret crush on Chaika. Come on Coffin Princess, you can do better than that.

Turns out having a lead who actually thinks before he acts is a good thing.

Best Episode: “The Valley of No Return” (too silly not to like)