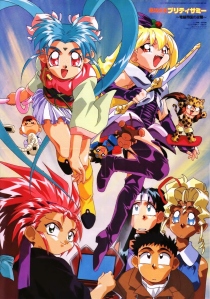 Synopsis: In the magical world of anime Japan, a pretty girl named Sasami is turned into a pretty magical girl named Sammy in the name of love, justice, and merchandising.

Pros: The Magical Pretty Girl Sammy franchise is a very interesting entry in the surprisingly wide Tenchi Muyo brand. The concept is based on a multiverse story from a CD Drama, which was later adapted into Tenchi Universe, and then into this OVA. The premise is fairly simple: Sasami and everyone in the Tenchi Muyo Universe cast is in a magical girl show. Now for me, I got a kick out of this, as it was yet another way to see the Tenchi English voice cast strut their stuff. And I do generally enjoy when an established anime experiments with other genres. The jokes are neither here nor there, though I did like the fierce rivalry between Ayeka and Ryoko (even if Ryoko is a lot more forward in this). The best character is probably Pixie Misa, Sasami’s delightfully evil rival. And while this show keeps it fairly light, the moments when Sasami gets serious is pretty cool.

Cons: The show is a 3 episode OVA what doesn’t really have an ending. Now, I looked it up, an apparently the Pretty Sammy brand has two other full length anime, Magical Project S, and the non-canotical Sasami: Magical Girl’s Club. So I would view this OVA as more of a backdoor pilot than anything else. The show is not amazing by any means. It’s got that traditional Tenchi Muyo jank in terms of animation and voice acting, but that’s kinda it’s charm (at least to me). My only real complain is against the show’s attempts to make the 10 year old, 4th grader Sasami “sexy,” or at least more sexual. I can always live without that.

She loves to double cross everyone!