Type: Not, ah, my favorite entry. 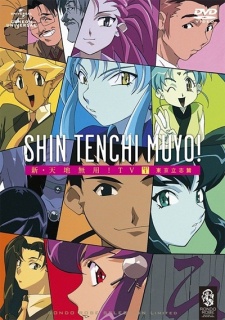 Synopsis: I was going to try to make a long point about people moving new places, dating new people, and how this sometimes means losing track of your old friends and family. But that was taking so long, so screw it. What this show is really about is Tenchi trying to escape his crazy life filled with alien girls by moving far away and shacking up with the most IRRITATING girl you could think of…only for her to be a psychic projection of another alien girl.

Pros: For all it’s faults, Tenchi in Tokyo does a good job at staying true to the characters of the Tenchi Muyo Series. There’s no real point that in the show that the characters act in a way that isn’t believable to them. The essential plot is that the bad guy tries and succeeds in separating Tenchi and crew, and each react to this in a way I can buy into. Mihoshi and Kiyone leave after getting a reassignment from the Galaxy Police. Ryoko goes on a violent rampage in space after having her heart broken, and goes through the best story arc she’s ever had in the franchise. Plus, it was cool to see Ryoko as a proper space pirate for an extended period of time. And Ayeka tries her best to keep it all together since, as a lonely princess, she most likely never had many friends. What’s also interesting is that this iteration of Tenchi may be the most unlikable he’s ever been, but arguably the most realistic. The catalyst for the show’s plot is when Tenchi decides to leave for Tokyo to further his studies. While there, he meets a seemingly normal human girl and starts to date her, leading to the group slowly drifting apart. What made Tenchi unlikable was his efforts to keep the girls away from him and his life in Tokyo. At first, it starts as him comedically trying to stop Ryoko and Ayeka from interrupting him from starting a new life. But as the show goes on, Tenchi starts to outright ignore his former friends. Almost as if he’s willing to abandon his friends if it means living a stereotypical normal life. The plot even revolves around this, as it’s Tenchi’s bond with the girls that the antagonist is trying to severe. What’s especially interesting is that Tenchi wasn’t tricked into doing this. Not really. All he did was move and meet someone. But that was enough to make him move one from his hometown life.

Cons: While the character work in this entry in the show was fascinating, and probably the best exploration of each member of the cast, or at least Ryoko and Tenchi, this show is a mess. The tone of the show is also all over the place. This show contains both the sillies jokes that Tenchi Muyo has ever broadcast, as well as it’s most dramatic moments.  It’s starts off way to slow. The first six episodes are basically an unfunny farce that do nothing to keep the audience’s attention. If I wasn’t for my commitment to the series, I probably would have stopped watching. Well, that’s a lie, I watch no matter how bad, cause I’m RIDE OR DIE. But I probably wouldn’t have payed as much attention. The real meat of the show doesn’t come until 7, when the show reveals how this version of Tenchi and the girl’s first met. From there we get Ryoko’s Date, Ayeka trying to hitch hike to Tokyo, Tenchi starting to date Sakuya–the real story basically. Then there’s Sakuya…OK, I don’t want to be that fanboy, but I’m gonna be that fanboy. Sakuya is a horrible character who forced me to skip every scene that she was in (which included the majority of Tenchi scenes). She’s a homewreaker. Literally. She was created to distract Tenchi and keep him away from the other girls. The other more interesting girls, like the bad-ass space pirate, or the alien princess, or the two space cops. The show tries really had to make the audience like her, but I don’t think she really added anything to the existing cast. Tenchi, like most harems, is build on troupes. Ryoko is the rude girl. Ayeka is the princess. Sasami is the cute one. Mihoshi is the ditz. Mihoshi is the exacerbated career woman. But no, Tenchi’s first kiss in the franchise had to come from Sakuya, another in a long line of cheerful school girls who makes boxed lunches every day and dreams of nothing more than being a beautiful bride, because Anime. Goddam it Anime. I think this whole thing would have worked better as a movie. It would have at least tightened the plot and reduced Sakuya’s screen time. That being said, I guess I can’t call this show terrible if it caused me to feel this strongly about it.

Watch it?: Man, for a average show, I sure had a lot to say about it. Heck I have more, like how Ryoko was the only one who trusted Tenchi with Sakura, but her trust was broken. Anime men are dogs! (3/5)

It was great to see Ryoko cut loose

Best Episode: Ep17-19 The Separation Arc (it’s like when your favorite band breaks up!) 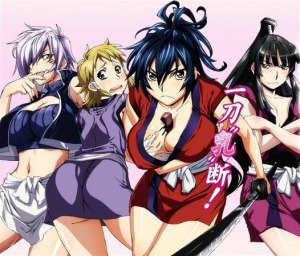 Synopsis: Think equivalent exchange, but with boobs. In Tokugawa Japan, a young kinoichi steals her clan’s boob stealing technique in an effort to change the world. A world where a person’s boob size determines their social rank. Except for men, who are still lords and heads of families under this system. A system that would logically only benefit women. Huh….Well, whatever, BOOBIES!!

Pros: Magic Breast Secret Sword Scroll, because why not?, is a fairly serviceable boob anime. The set up has out main character, Chifusa, traveling Japan as she tries to outrun “assassins” sent to get back the scroll she stole. Except that instead of dying, she runs the risk of having her boobs shrunken. For about six episodes, Chifusa uses the scroll’s technique to not only shrink boobs, but also absorb their power. Meaning that every episode we see Chifusa’s boobs get bigger, with sexy results. The show stays fairly consistent with it’s main gimmick: the show revolves around boobs because it’s world revolves around boobs. And it takes many instances to point out the silliness of such a world, often with ridiculous fan service. Bouncy bouncy indeed.

Cons: I mean, it’s kinda a one joke series, isn’t it? Throughout the show, we will see boobs bounce, jiggle, and even twirl. We see them get grouped, sucked, ties up, measured, weighed, etc. The joke gets a little stale. Then there’s the plot, which has an identify crisis. While it’s mostly a boob comedy, the show tries to throw in some clan intrigue in Chifusa’s feud with the Manyu clan. The clan’s head is Chifusa’s father, who coldly and ruthlessly sends assassins to ruin his daughter. But having a male villain in a show that focuses so much on breasts and women’s relationship with them feels incongruous.  For example, towards the end of the show Chifusa learns how to give breasts, not just take them. The secret to the technique is maternal love, a fundamental form of femininity. So it would have made a lot more sense if Chifusa’s main villain was a Woman who lacked maternal love and took breasts, and therefore femininity, away. It would have set up a nice metaphorical conflict between the positive femininity and negative femininity. I guess masculinity could also be interpreted as a lack of femininity, but it would be too simplistic to frame this argument through gender binary–What the hell am I doing!? This is a dumb anime about about big boobs! If you likes boobs and moaning then watch it, if not, then don’t!