Type: When your mom’s friend starts to hit on you.

Synopsis: In Japan, there’s this myth that if an item is possessed by a spirit, it gains self-awareness, often with the caveat that the item has to be 100 years old. In anime, characters often use anthropomorphized items as weapons/lover, especially when their human form is a cute girl. However, this become a bit awkward when the demon items are passed own the generations, and they start to tease you with their naughty bits.

Pros: Tsugomomo is what you would call a great commercial for the manga. I say this with no malice. In 12 episodes, the anime sets up the plot, the world’s rules, and provides you with enough sizzle to want more. In the show, a young man inherits his mother’s obi, a sash, that is actually a demon possessed item (a tsukumogami). They end up fighting together against the recent increase in evil tsukumogami and spirits. Of course, the obi takes the human form of a cute girl and Kiriha, whose power level determines her body shape. So she can become a mature beauty, or loli jail bait, but either way she’s still a flirty hot head. The protagonist, Kazuya, is surrounded buy spiritually inclined women, from a chibi-God to a well-endowed servant, to a thirsty child hood friend, making this a harem show as well. And boy, they do take advantage of that. And it always, ALWAYS, caught me off guard. I mean, just don’t expect that many blowjob jokes in a anime manga series, yet here we are.

Cons: In 12 episodes, you only get an introduction to the world. In a lesser show, the “read the manga” ending would be irksome. But this show is of a quality that it can get away with that. It has the right mix of action and comedy to keep you entertained. The only this it doesn’t do well is drama. Because the show is pretty light hearted, both in tone and art style, the more dramatic moments don’t land. For example, in one episode Kazuya and Kiriha have to stop a wig tsukumogami from attacking students. The big reveal was that the tsukumogami is possessing the dead corpse of a young girl who killed herself after her friends mercilessly bullied her for liking a boy. Pretty dark stuff, but none of it has any impact because you still have Kazuya and Kiriha bickering like an old married couple. So don’t watch this for the stakes. Watch it for the fun stories and characters, serviceable action, curb ball episodes, and moments that make you say “did I just see that!?”

I loved that her speech patters where so formal, yet so rude

Best Episode: Ep.8 “A Certain Day in the Kagami Household/The Super Popular Fragrance” (a silent episode and and echii episode, what more could anyone ask for!)

Type: A show about nothing, nothing but Penny Candy! 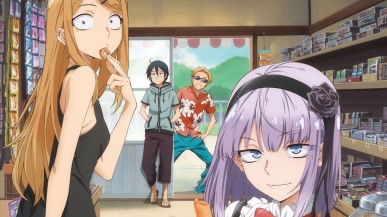 Pros: Maybe not that simple, but come on! The opening sets the tone for the entire series. How is Hotaru, the resident pixie girl introduced? First doing a backwards bow, second by hugging her breasts. That’s kinda how the show treats Hotaru, as a sexy weirdo. She’s not a bad character. In fact, she’s a super fun character. All manic pixies are. She’s an over the top candy fiend and her English voice actress plays her to perfection. I just wanted to point out what were dealing with here, because the anime is also super fun. It’s a slice of life anime that’s really light hearted and silly. Every episode explores a scenario set up by Hotaru using candy as a catalyst. I’m not sure if the penny candy is real or not, but if it is, it really reminds me of Mexican penny candy, down to the wrappers! But Hotaru’s antics only work if she has someone to play off of. Enter Kokonotsu, the male protagonist who Hotaru is trying to convince to take over his father’s dagashi shop. What I liked about Kokonotsu is that he’s very much a teenage boy. While he can play the typical “nice guy” protagonist, he’s still very well aware of Hotaru’s beauty, and would love to be more popular with girls, and goofs off with his best friends about pervy stuff from time to time. Both Kokonotsu and Hotaru make a good comedic pair, which all you need in a comedic anime.

Cons: On the surface, this show seems like a funny show with candy as a gimmick. But it’s actually a little pervy. Some of the jokes are definitely NSFW. Hotaru’s physique aside, they throw some dirty jokes at ya. Kokonotsu staring at Hotaru see through shirt I can understand. Hotaru being covered in “yogurt” is something else. A lot of verbal and visual innuendo going on here. So if your not into that type of humor, maybe look elsewhere. There are some sweet moments though, like when Kokonotsu’s dad complimented To, implying that maybe To’s dad isn’t round? Because you don’t really see alot of characters outside of the main cast. The only other thing to look out for is the fact that the anime doesn’t really “End.” It finishes. Whether or not Kokonotsu stays at the shop or leaves is not resolved, nor does he become a couple with Hotaru or childhood friend Saya. It’s a “read the manga” ending.

How is candy so arousing?

Or, “Why anime nerds like shows about one dude getting with a bunch of hot chicks, and what makes for a good never-in-a-millions years, grow out of this adolescent fantasy, visit Utah: it’s not that great, harem show.” END_OF_DOCUMENT_TOKEN_TO_BE_REPLACED