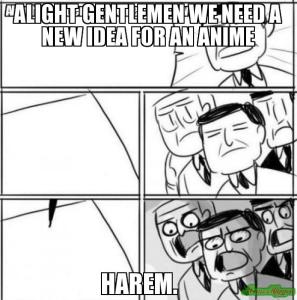 Or, “Why anime nerds like shows about one dude getting with a bunch of hot chicks, and what makes for a good never-in-a-millions years, grow out of this adolescent fantasy, visit Utah: it’s not that great, harem show.”

The “harem” genre in anime is defined by a show where the protagonist is in a polyamorous relationship with three or more supporting characters. The majority of harem shows are comedic in nature, revolving around love triangles, misunderstandings, and sexually charged fan service.

As this site moves into the latter half of a decade, I thought it prudent to explore the genre that I, for better or worse, am most familiar with. The first anime reviewed here was a harem show, Tenchi Muyo. As such, and in honor of this site’s origins, I will be exploring the appeal of the harem show, the male protagonist, the female protagonist, women’s roles in general, the place for “reverse harems,” the harem genre in the west, the issue of the harem dilema, and finally, the future of harem shows. With all this, I hope to shed some light on why shows where a gaggle of attractive women love a completely ordinary “good guy” persist with sophisticated Otoku audiences.

Why the harem show is appealing?

It’s all about sex. Specifically, the male fantasy and desire of sexual virility. In our current society, one of the ways men and women find social validation is through erotic attractiveness. Do you have the ability to make people want to have sex with you? For men, this comes in the form of attracting multiple women to you at a given time. To men, the number of potential sexual partners any one male can have is given more credence than even personal strength, financial health, or intelligence. After all, what’s dead lifting 500lb compared to having sex with 5 women? Problematic? Yes, but that is the base nature of man. Call it sexism. Call it biology, it exists in every man. And the harem show is the base nature of man given life.

That’s the psudo-psychological reasoning. But in more general terms, harem shows are anime that appeal to the lowest common denominator. Consider the key facets of a harem show: a specifically average and relatable protagonist, attractive women, low stakes plots, and sexy comedic misunderstandings. Harem shows are junk food. They are 20 minute stories where pretty girls get into funny situations and sometimes try to hump a protagonist. The most common joke in these shows are walking into a female character while she’s in the middle of dressing up. These shows don’t require a lot of mental effort from their audiences. For most harem shows, there is not grand message, no crucial moral. It’s literally, “hey, you like pretty girls? Well, here’s a story about a bunch of pretty girls that like a guy who’s kinda like you! And guess what? They have boobies!” I’ve thought about his a lot, and this is the most realistic answer I could think of.