Type: You mean my mom has the hots for me!? 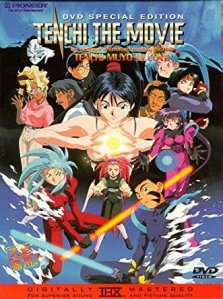 Synopsis: Man, this is heavy.

Pros: I mean really, this is just Back to the Future. This is part of a series of movies that I like to refer to as the “Tenchi Universe Trilogy,” or Tenchi Universe Season 2. Sorta how like the Futurama movies are all considered Season 5. The Tenchi Universe series isn’t my personal favorite in the franchise, but it is the most accessible. This one explore the issue of Tenchi’s mother. A bad guy tries to kill Tenchi’s family by attacking Tenchi’s mom in the past, so Tenchi in the gang have to go to the past to make sure that Tenchi isn’t erased from existence. This was pretty cool, and I liked Achika Masaki better than Kiyone Masaki, Techi’s mother from the OVA series. Mostly because Kiyone wasn’t given much screen time. I also really liked Ryoko, as I always do, and she had a pretty slick, if brief, but of fight animation. In fact, since this was a movie, it has pretty good animation in general.

Cons: The movie is fine for what it is, but is doesn’t go far enough. It doesn’t play around with the 1970’s setting. It doesn’t play around with the idea of time travel much. But worse, it doesn’t really explore Achika outside of her early relationship with Tenchi’s dad. She isn’t really a character, she’s a Mcguffin. The only real emotional conflict comes from Tenchi trying hard to protect his mother, who he never really talks to in the movie. Which sucks because we could have gotten interesting interactions with Achika, Ryoko and Ayeka. We could have seen how Teanchi’s grandfather behaved as a father to a young woman. Or we could have just gotten a story of Achika’s daily life. Her status as at least a part-alien living on Earth with a royal lineage strongly mirror’s Tenchi’s life, and we could have seen them bond over their unique situations. Kinda a waste of potential at the end of the day. (p.s. There was also this bad guy that wasn’t really the antagonist who was really there to misdirect the audience and died a useless death).

Watch it?: If you like Tenchi Universe, then sure 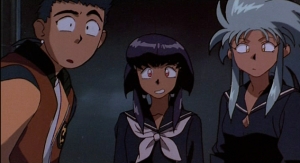 She also got the final hit on the bad guy.