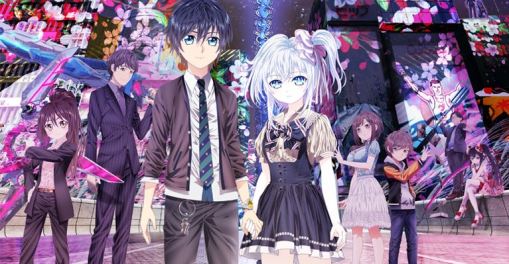 Synopsis: A long time ago, or at least by anime release standards, this show made a very specific impression. It had a…unique animation style, and it’s first episode ended with a busty goth girl wrapped in chains heaving in sexy pain. This turned a lot of people off. That’s the thing about first impressions, you only get one.

Pros: Unless your me! I’ll give anything multiple first impressions. It took me 4 tries to get into The Office. 2 for Parks and Recreations. About 8 for the Dark Souls series. So I was like, what the hell?. I’ll watch Hand Shakers. How bad could it be? And honestly? It’s not that bad. It’s not good. But it’s not trash. It’s more, bargain basement than anything. A lot of the fun of the show come from being introduced to different Hand Shaker teams. The whole show is a Partner battle royale, with the winners getting a wish from “God.” So what you get is a lot of different pairing working together to achieve their goal. The fact that the fights are sudden death means that, no matter what, someone is losing their wish. It gives each team an understandable reason to fight. It’s really the exploration of each team’s origins and motivations that make this show interesting. And I’ll admit, the show’s fights and comedy moments grabbed my attention more than once. This show had competent directors by the feel of it.

Cons: Maybe sometimes if you don’t have something nice to say, don’t say anything at all, but I did start with some positive praise, so….OK, LOOK, I don’t hate this show. But it really is a good bad show. The story is predictable and clunky. I mean, a battle royale where if the protagonist loses, she dies? Really? The protagonists are boring at worst, saccharine at best. Yes, your a male protagonist who will mamuru his lady love. Yes, your a female protagonist whose secretly the strongest hand shaker but needs to learn how to “love” from the first boy she meets. All we need is a tragic back story and evil twin sister…Oops. What else can I say that no one else has? Awkward dialogue. Rush story. Visibly low budget. Some problematic issues (incest, the first episode, come one guys!). And of course, you can’t really ignore the 2D/3D animation style they went for. Not a personal fan, especially because Tazuna’s head look weird. Like his head model and body model weren’t meant for one another. But I think the most egregious issue is the real-life stills that they use as the backgrounds for the show. Now that is just sad. But still. Had the show been an exploration of the teams instead of the Tazuna/Koyori show, and had the used animated backgrounds, and maybe not gone with pairs fueled by incest and BDSM, then I think it would have been a better show for it.

I wish they had been used more as mentors