Synopsis: It starts with U.A. High going on a school trip to the woods that ends with several children being injured and one kidnapping. It continues with several U.A. students attempting to interfere with a complicated and sensitive rescue operation. It finally ends with U.A. giving an exam that give minors licenses to get into fights with maniacs. Hogwarts don’t look so bad now, does it?

Pros: My Hero Academia season 3 kinda fixes every problem I had with season 2. Real talk, given all the hype around season 2, I was a little underwhelmed with the second season. I wasn’t really a big fan of Stain, and the tournament arc was just a tournament arc to me. But this season, man, this season was all that, and a bag of chips. This season had a lot of the hallmarks of the superhero genre that I love. Finally getting out of the school setting, this season explored the world more, and gave more context of what it means to be a hero in this world. We finally get to see Deku actually save a person from a super villain using his superpowers. We see the “death” of an important hero at then hands of a truly evil being. We see how the world reacts to this. However, the most important things this season does is explore the concept of how heroes inspire heroism in others. Over and over again, we see how the heroic actions of certain characters influence other characters to act the same. This, I think, is the true purpose of a hero. To inspire others to be heroes. To show others that they can be a better version of themselves. To show us that even in the darkest, most dire hour, there’s still someone who can save you with a smile on their face, even if that someone has to be yourself.

Cons: The season has a weird non-ending. Like, it doesn’t really have a cliffhanger per say, but a “until next season” sort of ending. Not a fan of that. I like bookends. The show also ends of another school related battle royal. Not a fan of that either, but it does set up a killer final battle for the season. This season also got me to catch up on that manga, which I had been meaning to do for a while now. So it’s actually a pretty good season overall. 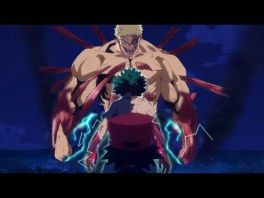 Dude, the fights were sick this season!