Type: From the director of Ghost in the Shell.

Synopsis: Like for real. The guy’s name is Mamoru Oshii. Man, the anime industry is a small world sometimes.

Pros: Finally! I got to experience Urusei Yatsura. Or should I say, the first time I got to experience Lum. The original magic pixie magical alien dream girlfriend. She was…fine. Cute, I guess. The story overall was pretty funny. The cast is trying to get ready for the school festival, but then realize they’re stuck in a time loop. There experiencing the same day over and over again while the city around them ages. How long have they been in the time loop? Who can say. But its clearly been a while. The characters were all fun, and I got interested in finding more Urusei Yatsura material for the future. But the real selling point is the animation. As the film goes one, you could just tell that the animators were flexing their creative muscles. We got shadows, tracking shots, long shots, looping scenes, high speed movement, intricate body work, small but noticeable twitches, etc. It a great movie to make a trailer with. A great movie to make a slide reel out of. And it was made in 1984! If you’re an animation geek, you’ll enjoy this one.

Cons: So it turns out that the time loop is caused by a dream demon who wants to create his own world. He uses Lum’s ideal world as a foundation. What kinda sucks is that the finale focuses on the dream demon and Ataru, the male protagonist of the manga series. But he’s a protagonist who doesn’t really do much in the movie. He’s more of a side character, with Mendou and Sakura acting more as the driving force of the film. I found Ataru move annoying than endearing, so his showdown with the demon didn’t land for me. That being said, I wouldn’t mind watching more of this.

Watch it: An enjoyable 100 minutes or so. 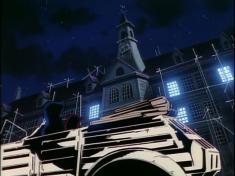 The school scene or space scene. Both amazing.

Best moment: The school blackout scene. (just show off why don’t you!)