Type: A horrible nightmare for some, an opportunity for others.

Synopsis: A complete nerd that spent 12 YEARS on an online MMORPG has to sadly say good-bye to his friends as the servers are being shut down. As he closes his eyes to feel the sweet relief of digital death, he discovers the he is now stuck in the game. The game where’s he’s an over-leveled sorcerer, and commands other over-leveled characters, some of whom are hot babes that want to literally jump his bones (he’s a skeleton). Man, if I wasn’t such a huge nerd in other areas, I’d give MMORPG’s a try. According to anime, there’s no downside!

Pros: So this is an Isekai series…sit down DAMMIT! Or I’ll never give you the launch codes! Anyway, this one’s gimmick is that the character is stuck in a non-human body and is in charge of a crew of boss tier NPCs. Since the main character, Momonga, is the only player character still in the original game, the story takes him to another country. Kinda like an expansion pack map (or DLC for you kids out there). The two main plots are Momonga slowly gaining influence in the new country, while also trying to discover if any of his friends are also in the game. What I liked about this Isekai show is that Momonga is stuck in his player avatar, which is a huge skeleton, and how he basically starts to become his character, like become more indifferent towards other humans, and how something or someone is preventing him from losing his temper. And since he’s a character that’s been leveled up over 12 years, it makes sense that he’s so overpowered. Plus, Momonga’s tendency to reminisce about his past friends gives his characters an extra layer of sympathy.

Cons: Momonga’s general’s aren’t anything to write home about. They’re basically a mix of different troupes that, in fairness, seem like a group made by a bunch of MMO junkies. Even Albedo, the poster girl, isn’t that deep. Just your basic devoted demon. The best part of the anime are the first 1-4, which serve as an introduction to the series and help flesh out Momonga’s character. Episode 5-13 sadly move away from Momonga’s palace and deal with a local adventurer’s guild and church baddies. It ends with a battle against one of his generals (who’ve been brainwashed). Not bad, but nothing to write home about. Literally. And obviously, any fight involving Momonga has no stakes because you know that he’ll win, but sometimes having a show like isn’t a bad thing. 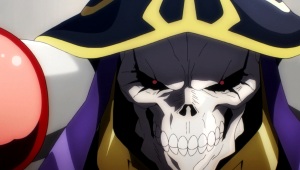 All hail the overlord!

Type: How can my murder machines be so cute!?

Synopsis: It’s like Bend It Like Beckham, but with tanks, and different characters, and an unrelated plot. Maybe this analogy doesn’t work anymore.

Pros: This is a moe-military anime that I had no idea was given a film. Well, I say “film,” but it’s really more like a long OVA, or a pseudo-second season. The story is that the girls at Ooarai Girls High School are on top of the world, until the MAN tells them that the school that lets them use live ammo to attack each other in war games will be closed down. Kill joys. The girls then go through a sort of graduation/splitting up story, where we get to see our cute main characters act cute about leaving behind the only friends they’ve ever had. Aww, their lives are breaking apart. How kawaii. Any who, they girls get a change to win their school back competing against a college war tank team. It’s pretty unfair, but it does give us a pretty awesome 20 min skirmish that included the multi-national characters introduced during the series (clearly the focus of the animations team’s time and money). I feel that I’m underselling this. If your a fan of this series, then the return characters, the interactions between the main cast due to the threat of splitting up, and the final battle are all for you.

Cons: It doesn’t feel like a movie. It feels like a long TV episode. This is partly because a lot of the events happen close enough to each other to feel rushed, but not spaced out enough to build mood. It basically goes: The girls are told their school is closed, the girls are given temporary lodgings and feel sad, they spend a day doing nothing, they get the news they have chance to save their school, they have a competition and win. The end. The antagonist, or rather the big challenger in the film, is also underdeveloped. She’s a loli/quiet character whose mostly used as the focus of personality for the college tank team, who are severely lacking in charisma. It’s almost like the writers have no interest in physically developed grown women and would rather focus more on young, sometimes underdeveloped, high school girls….

Best moment: The Italian team’s battle scene. (what a maneuver!)

Synopsis: We’ve all been in this situation. You have a great job, are surrounded by beautiful people, and are generally successful at what you do. Only to have the job basically kill you. Have all the beautiful people have terrible personalities. And have all your success lead to an arrest warrant, major debt, and religious arguments. At least you house wasn’t taken away (just the furniture).

Pros: KonoSuba season 2 follows almost immediately after the first season. Kazuma and the gang are put on probation for suspicion of working with the Demon King, and have to pay off all the damages they caused while saving the city at the end of the first season. That’s the first half of the season. The second half revolves around a trip to a hot springs city that worships Aqua, and the predictable trouble that causes. The benefit of watching KonoSuba this time around was that I got a better appreciation for the characters and their stories, mainly because I got to interact with them more. The first season went by so fast and had to much hype surrounding it, that it fell a little flat for me. Not so with season two. The first half gives you a nice, weekly adventure that doubles as spotlight episodes for the characters, thus allowing yourself to re-familiarize yourself. The second half gives you a more traditional arc. Overall, this second season has the advantage of having all the characters already established, thus allowing it to do more with them. It left me wanting more in a good way, so I hope it gets another season, or else I’m going to have to seriously consider breaking with my own habits and start reading the light novel.

Cons: There are a few little things I don’t think land. The characters of Yunyun and Vanir aren’t especially funny. Yunyun’s kinda meh. And Vanir feels derivative. I also think the Darkness jokes are kinda lazy. Not the sadism ones. Those are always gold. But her spotlight episode, Ep.4 “A Betrothed for this Noble Daughter” focused too much on fan service and came off as lazy. We get it, she’s the blond with big boobs, can we move on now? I also feel that maybe the whole season ended a little anticlimactically. The battle with another demon general was awesome, don’t get me wrong, but everyone just going home to have some tea without a punch line was maybe to the ideal way to end it. Just my opinion.

Watch it?: A solid sophomore effort. I burned through it rather quickly. (4/5)

Best Episode: Ep. 1 “Give Me Deliverance from this Judicial Injustice!” (I mean, he did steal those panties…)