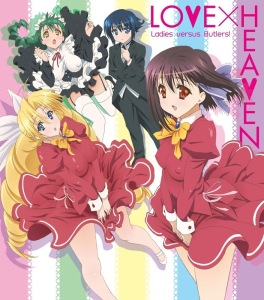 Synopsis: This kid named Akiharu Hino enrolls at this school that trains servants and teaches rich girls. On his first day he accidentally gropes the resident blonde rich girl, and is immediately labeled a sexual deviant. He’s almost lynched, but he gets saves by his childhood friend who mentally traumatized him because she had a crush on him. Then a bunch of nudity happens.

Pros: The biggest laughs usually come from the fan service jokes. I don’t want to label the show a “sex comedy,” but it comes pretty darn close. It’s certainly liberal with its censorship (just shy of full frontal). But what really popped out at me was the animation. The backgrounds are extremely well done. Its an aesthetically beautiful anime.

Cons: I really did not like the inclusion of a “little girl” character (19 my ass). I also felt that the anime was a bit lacking. You don’t really get attached to any of the characters expect for maybe the blonde one (Selnia Flameheart) and the roommate (Daichi). The rest are one dimensional.