Type: It’s amazing how quickly they abandon their original premise. 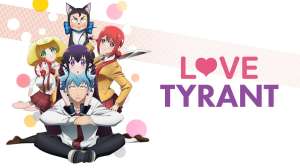 Pros: Love Tyrant is a manga based anime with a bit of a muddled plot. The gist is that the cupid Guri creates a love contract with a boy named Seiji, which eventually includes the yandere Akane and her obsessive sister Yuzu. The humor comes from the mixing of these four very different personalities, with Seiji playing the straight man. The show emphasizes the “comedy” part of love-comedy more so than other shows. It gives Love Tyrant a bit more of a unique taste than it’s fellows in the genre. My particular favorite running joke was the characters forgetting what the premise for the show was (i.e. that they have to make couples or lose their souls). I also liked it when Akane violent rage played off against Guri’s playful personality. In fact, Akane and Guri’s over the top personalities make them some of the strongest characters I’ve seen in any harem. Each of the females main cast have interesting backstories involving a struggle between heaven and hell and a family drama, with Seiji acting as an audience inaugurate whose along for the ride, which is what a good harem show should try to shoot for.

Cons: As stated above, you do forget what the original premise is. It’s not crucial to the show, but still. The only episode that really follows the premise is episode 2, so of course it’s the weakest episode. I highly recommend skipping that episode (it involves a student-teacher relationship, which makes it unfunny and icky). And the show doesn’t really break the love-comedy mold. It just stretches it to add more irreverent humor. Stabbings, parodies, boys-love, the show is just a very funny harem show. Oh! And I forgot to mention one of the best characters in a show of great characters: Shikimi. Shikimi is the primary antagonist of the show, and is so delightfully evil, it’s great! Shikimi is Akane’s cousin, and almost always steals the show with her manipulative personality and sadistic nature. The show makes you feel scared of her, but also strangely attracted. The only real bummer is that the show may not get a second season, which sucks because the next story arc fully introduces and explores Akane, Yuzu, and Guri’s mother.

While Akane is best girl, Shikimi can’t not be the best.