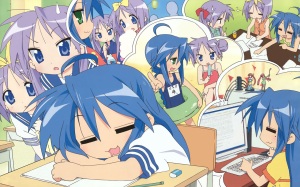 Pro: This was actually my second attempt at watching Lucky Star. The first time I tried to watch in Japanese with English Subtitles, and couldn’t get past the first ten minutes. I though it was too slow and kinda boring. I watched it again with English Dubbing and loved it. The lesson here is, seemingly, don’t watch pure humor anime in Japanese. Or maybe that’s just me. Anyways, I really enjoyed watching Lucky Star. The jokes landed well. The appreciated the references to other anime. In contrast to my initial hasty judgement, I never found myself bored. I all honesty, I could have watched tons more episodes of Lucky Star, which I can’t say for many other shows.

Cons: As I mentioned above, some of the humor can be lost in translation. I’d recommend watching it in English if you can (something I don’t usually recommend). You should also be aware that the show is based on observational humor, so don’t expect anything flashy. The animation also bugged me, only because the girls looked like they were in Middle School, not High School.

Otaku after my own Heart

Best Episode: I can’t decide (you’ll just have to watch a figure it out)