Type: Should I count a 3d movie? 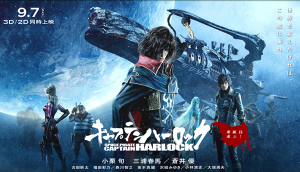 Synopsis: So a bunch of jerks fly around in space being jerks while a bunch of losers rule humanity by being losers. In this movie, the losers send a baby loser to infiltrate the jerks, then the jerks go back home and start fighting with the losers, then the baby loser gives everyone a flower so they’ll stop fighting.

Pros: The 3d animation is gorgeous. I can’t say that modern gaming consoles aren’t catching up, or already there, but the movie is still very pretty. The backgrounds and space ships are the real winners here. The faces, well, let’s keep this positive. Speaking of needing to keep things positive, here’s the thing about the plot: it’s told backwards. By that I mean that the key motivations for the characters are reveled around the middle of the film in flashback. This kind of narrative structure usually works really well in tv and comics, but its a bit trickier in film. Due to the time limitations, keeping information like this hidden seems more forced than in other mediums. In the film, you meet Harlock and Yama before you know their backstories. As such, Harlock comes off as a brooding-egotist, and Yama comes off as whiny. Then you learn their about their past and you like them more because their motivations make sense. But until this information is reveled, it’s hard to like the characters in this film. For example, this review is based on my second attempt at viewing this movie. A few years ago iIn my first attempt, I quit halfway, right before backstory dump, because I could not stand any of the characters. But those backstories are worth it, and I kinda wish they had been the focus of the film. They’re that interesting, particularly Harlock’s. The whole political story involving Earth, Harlock, and the powers that be would have made an awesome origin film.

Cons: I’ve mentioned my problems with the structure of the film. Animations wise, the only real issue is with the faces. One of the reasons why a lot of movies with 3D animations tend to lean more towards the cartoony side is because they can play around with the faces more. But in cases such as Harlock, movies try to mimic humans expressions more realistically, and fail. The faces here are stiff. Not bad, but stiff. I should so mention that for die hard Harlock fans, this is a whole new backstory and set up. Now plot wise, theirs only one big thing I have a problem with. Spoliers ahead. In the film, the big turning point is when Yama discovers a flower on a barren Earth, which cases Harlock to change his plans and fight again. But how did Yama get to Earth? He was on a ship with his brother on board, so he couldn’t have just walked off. He may have stolen a ship, but why go to Earth? What possible motivation did he have? To die? Maybe. But we get no indication. No inner thoughts. In the end, the big deus ex machina revolves around the seemingly random actions of some kid. Like a lot of things with the story, this was really sloopy. (P.s. Does the ending imply that Yama is the Harlock of the old anime? Does that even make sense?)

His motivations were clear from beginning to end.

Best Moment: The final scene between Nami and Isola. (the most emotional moment)