Type: Why do we fight? 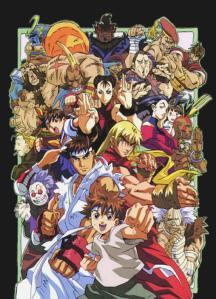 Synopsis: The world is on the verge of being take over by an evil organization led by a mad man with psycho power, while warriors around the world fight among themselves to prove their strength. But whatever, lets talk about some weird kid from Brazil (and I ain’t talking about Shawn).

Pros: Street Fighter Alpha is my favorite Street Fighter series. For you normals, the Alpha series was a prequel series that adopted more anime like designs for all the Street Fighter characters. What I’m saying is, I thought it was cool to see people like Birdie, Dan, and Sakura in the movie. The plot is fairly straight forward: Ryu is afraid of turning evil, he gets a “brother,” the brother is kidnapped, Ryu tries to rescue him and has to decide if turning evil is the best way to go. In, out, and to the point.

Cons: I hate the kid in this. Ryu’s “brother” can actually be omitted easily. Especially because Sakura is RIGHT THERE. Her whole plot is that she wants to be Ryu’s apprentice. Why couldn’t she tag along with Ryu? Why can’t she be struggling with the Dark Hadoo? Oh. my. God. Sakura could literally fill in for Ryu’s “brother” in every way! In fact, every original creation in this movie is bad. Why isn’t Bison trying to get the Dark Hadoo (you know, like in the game!?). But overall, this is pretty OK. Not great. I don’t think Street Fighter really translates well into other media. (p.s. Zangief was weeeeird in this).

Watch this!?: Better than the Street Fighter IV movie

You need to keep fighting, to find that answer!

Best Moment: Sakura trying to find Ryu (will she ever win?)