Tag Archives: The Angeloid of Clockwork

Heaven’s Lost Property the Movie: The Angeloid of Clockwork 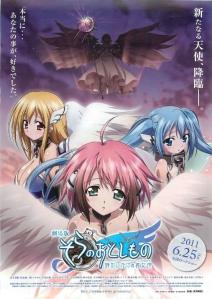 Synopsis: One day a poor girl named Hiyori secretly declares that she likes local pervert Tomoki Sakurai…then a busty angel/robot falls on top of him. She begins to stalk him from afar, afraid that this boob crazy maniac won’t like her or her big boobs. She does manage to start hanging out with him, even starting this strangely convenient relationship with Tomoki. Then she dies.

Pros: I didn’t know how much I missed Heaven’s Lost Property until I saw this film. It actually made me skim through the last parts of the manga. Most of the shows gags are still in place. Tomoki is a perv, people hit him for it, etc. The emotional core of the film was Hiyori, a hard working and earnest girl that has a crush on Tomoki. While not an original concept, you do feel sympathy for Hiyori, if for anything, developing feelings for a guy who once made panties fly in the sky.

Cons: This isn’t really a “movie” in the truest sense of the word. The first forty percent of the film is a recap of the show, with a few scenes put in from Hiyori’s point of view. This is Hiyori’s movie, so don’t expect to see a lot from Ikaros of the other angeloids. The rest is more like an hour long TV special, or OVA. The animation is also about the same as some of the better looking episodes of Heaven’s Lost Property. As I said, don’t go expecting to see an actual “movie-movie.”

What it!?: Skip the first third, then enjoy the rest

A girl who likes plants

Best Moment: Tomoki’s purity challenge (so dumb, I love it)