Type: God, do you remember when this was called “Samurai X?”

Synopsis: Set in the not so fun time of the Bakumatsu and Meiji Restoration, a young swordsman named Himurai Kenshin joins the Imperialists as an assassin. Earning the moniker Hitokiri Battosai, or Man-Slayer, the once gentle soul tries to build a better future through steel and blood. His life changes, however, when he meets a woman named Tomoe, who affects his life so much, that his future becomes much less detailed and more gag heavy.

Pros: So, the thing about Trust & Betrayal is that everyone really, really likes it. It’s considered one of the best OVA’s in the medium’s history. Why? Well, it does what the Dark Knight did years later by taking a “realistic” approach to a largely fantastic story. Everything, from Kenshin’s design to fighting style are taken down a notch to appear more true to life. The dialogue is slower and quieter, and emotion is a lot more subtle. It basically stays true to the manga version of Kenshin’s backstory and provides the last missing piece to the anime’s story.

Cons: I’ll be honest, I don’t particularly like Trust & Betrayal. I never have. I don’t like the redesigned character models or the serious tone. If found it way too somber, slow, and totally devoid of the charm of the original anime. Granted, I will acknowledged that it is a good OVA. Even within the franshise, it makes for a nice contrast between Kenshin’s life as an assassin and the life depicted in the anime. The issue really isn’t over the quality of the OVA as much as it’s with the overall enjoyment you get from it. I didn’t enjoy it, but this is one of the very rare franchises that I actually have very strong preconceived notion and thus honest fanboy bias. So my dislike may be in the minority.

The reason for wandering

Best Moment: Revealing how Kenshing got his scar.

H2O: Footprints in the Sand 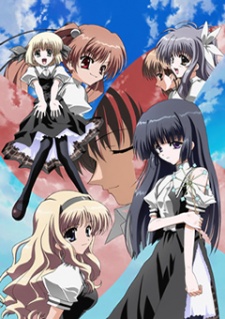 Synopsis: Blind boy Takuma Hirose just recently moved to a small town in the country. The town’s favorite pastime is mercilessly tormenting this young girl named Hayami Kohinata for no real goddamn reason. This being an anime, Takuma manages to get the younger generation to cool off Hayami. Then it rains and something incredibly stupid happens. Their’s also this fairy girl in it, but I forget why.

Pros: This show managed to get an emotional reaction out of me. It plays off the small town setting really well, establishing a shared history that you just can’t get in more urban environments. You may not agree with the village’s thinking, but you at least understand their mentality. There’s are also some funny moments that help alleviate the dramatic tension. Overall, a good anime soap opera.

Cons:  I really hated everyone in the village for being so incredibly mean to Hayami. I understand that this is basically the foundation for the show’s conflict, but seriously, fuck those villagers (Hayami got beaten up waaay too much). I felt that the show used too many flashbacks. I felt that the show got too cartoony in its attempts to balance humor and drama. The ending also really bugged me. It employs a last minute twist that never really works and just comes off as lazy story telling.

Watch it?: Its a Small Town Soap Opera that’s worth the watch (4/5)

Type: The Fucked Up Kind

Synopsis: So apparently the biggest dick in the universe is this thing called Gantz. This big black orb thingy randomly makes copies of dead people and forces them kill aliens for its amusement. To be fair it does give you weapons, power suits, and the target, but that’s about it. No instructions. No tips. If you die in the game, your dead for good. If you try to run away from the game area, your head explodes. Gatnz insults you at the end of the game and gives you points. Your free to live your life in-between games, unless Gantz copied a person that wasn’t fully dead, then you sorta have to avoid awkwardly meeting the original you.  Once you get 100 points, Gatnz lets you go for reals.

Pros: If your a fan of “realism” in anime, then you’ll probably be a fan of this. All the characters in the show act like real people, full of flaws and anxieties. What makes the show interesting is seeing all these “real” people deal with such an extraordinary situation. To makes things more interesting, the show actually allows people to die, no matter who they are. So in every Gatnz Game you get a new set of people and group dynamic. The only constant being the protagonist Kuruno. While I’m not a fan of this type of anime, I was genuienly interested in what was going to happen next, and hope they make more seasons in the future.

Cons: As stated above, this show incorporates “realism.“ This means that the characters are drawn realistically, which I was not a big fan of. It also doesn’t shy away from issues like abuse, bullying, crime, suicide.  When I used the term “real” people, I of course meant assholes (if I had a dollar for every dirtbag that wanted to molest Kei “big breasts” Kishimono…). The characters in Gantz aren’t very likable. Some are angry, some are crazy, some are losers, some are whiny, some are self centered, some are killers. Gantz tends to revive a mix of people. This show also has a lot of casual nudity and violent gore. So if anything stated above is not your thing, don’t watch it. (p.s. Kato cried waaay too much. That boy had feelings.)

Synopsis: This guy named Makoto loves this big boobed girl named Kotonoha, and uses his friend’s Sekai’s advice on how to court her. Then Sekai moves in on him once he becomes forbidden territory. Then a bunch of stuff happens, and they all kill each other.

Pros: Based on the fact that the animation style is very cutesy, the turn that this anime takes after the third episode really takes you by surprise. Scandalous is a good word for it. Its a very dark look at the harem genre. Because, when you really think about it, a situation in which a group of young women are all competing for the affection of a singular young man would probably not end well. Loyalties, resentment, emotions, and hormones would make it very complicated very fast. The show also manages to be sexy without showing much. Teenagers are having sex y’all. And to top it all off, the ending. Man…the ending.

Cons: The protagonist Makoto. Well, the entire cast really, but Makoto specifically. Dudes a horrible person. He only thinks of himself and never considers the consequences of his actions. In all honestly, this is probably how the average male would act if presented with a harem situation (a.k.a. sleeping with as many girls as he can), but still. Actually, each of the characters act out of self interest. This is a rare case where the story supports the cast, instead of the other way around. If your use to the more wholesome nature of harem animes (sex jokes and all), then this show will disturb you a little.

Type: A Sad Life anime about a Sad Life

Synopsis: Story revolves around Tomoya, a guy who married his high school sweetheart, had a kid, and then became a raging alcoholic (but not in the fun way). To be fair, his wife died giving childbirth and he didn’t have very good coping mechanisms. Then a little girl and a bear show up. Best part is, it only gets sadder from their. The show violently attack you with emotions until you lie crying in defeat. At every turn. Its relentless. Resistance is futile.

Pros: Super Emotionality. Still a word. After Story takes all the elements of Clannad, front loads its season with high school stuff, and leaves the rest of the show to deal with the consequences. Unlike other romantic animes, we get to see the teenage couple enter early adulthood. Tomoya and Nagisa’s interactions sell the show, which make their ultimate fates all the more powerful. *Spoiler Alert* Nagisa dies. But, as stated earlier, that’t not the pinnacle of sadness. The rest of the show deals with Tomoya not being able to move on for the sake of himself or even his daughter. This is exactly what would happen if one half of an anime couple died off after they “beat the odds” and got together. Heck, it happens in real life (thus, the slice-of-life moniker).Tomoya’s character growth for the rest of the anime makes it a must see. He finally becomes a good father and son, and is ultimately rewarded for it.

Cons: About a third of the this part of the series has a bunch of high school stuff that feels more like padding than anything else. It has nothing to do with plot. At all. Skip it. Really. The rest is great.

Watch it?: Absolutely, but watch Clannad first, and skip about the first nine episodes of After Story. (4/5)