Type: Too little, Too late 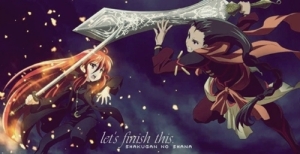 Synopsis: Three seasons later and the plot finally arrives! Yuji has teamed up with a snake god to make a new world for the human eating demons he calls “Tomo….something.” The Flame Hazels are real assholes about it and refuse to let the demons have a new world. Shana ends up fighting Yuji, because even though she’s still in love with him, she ain’t ganna let no man tell her what to do. You go girl.

Pros: F#$ing FINALLY! After sloshing through the garbage of the first two season, we finally get to the good part. This season introduces the full forces of both the Flame Hazel and Bal Masque as they fight a world wide war. Where introduced to a lot of cool looking Flame Hazel and Bal Masque Tomogara. It’s basically franchise’s Return of the King. I just wish this had happened sooner. The most interesting part, as always, is the relationship between Shana and Yuji. Graduating from useless to fascinating, Yuji willingly sacrifices everything to create a peaceful world. Shana, to her credit, stays true to her role as a Flame Hazel, opposing Yuji’s plan. I will give the franchise this, they did a great job of making Shana a strong heroine, escaping the trappings that her moe-design suggested. There’s an interesting story here, and maybe in the future, someone will know how to tell it properly.

Cons: This season is good in the way that finding a completely wrapped candy bar in the garbage is good. You’ll eat the candy, but the faint smell of garbage will stay with you. This season did almost everything I’ve wanted the series to do. I did away with the boring high school cast and setting, it introduced ways more about the Flame Hazel, it made Bal Masque interesting, and it make Yuji cooler. But it’s simply not enough. And sadly, you can’t really watch this one without watching the last two season. Even that won’t clear up some of the confusion. The show introduces all these new Flame Hazel that were suppose to care about in one go. But I don’t know these people. I haven’t followed them for three season. Why should I care what a nun and army guy think about?  Who are they to say that the Tomogara can’t have a new home? That’s another thing, the show did a poor job at explaining exactly why the Tomogara getting a new home was such a problem to the Flame Hazel. All I got from it was that the Flame Hazel condescendingly thought they knew better than the Tomogara and didn’t trust them. Very First World vs. Third World. So naturally, I found myself rooting for the Tomogara. Finally, being the last season, I feel that the writers tried to cram as many light novel characters as they could, which never, ever works. They also tried to tie the loose end of Yoshida and Pheles/Johan, three characters I literally hate.

Finally worth our time